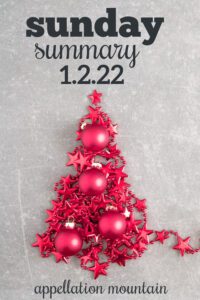 The poet Charles Lamb once wrote, “No one ever regarded the first of January with indifference.”

Everyone loves a fresh start.

If you’re hoping to grow your family in 2022, that’s even more true. There’s nothing like welcoming a new child to make everything seem possible.

January 23, 2022 will make this blog’s fourteenth anniversary. Whoa! I published the very first posts way back on January 23, 2008. Which feels like yesterday and a lifetime ago. Once again, both things are true.

I have some ambitious plans for the coming year, but they’re just big enough that I’m not sure what the timeline looks like. But it makes me greet the first of January with a certain amount of giddiness.

Cheers to the new year, and here’s hoping that your plans, be they modest, ambitious, or anywhere in between, are met with success.

When the headline reads “I refusjane to give my children normal names, I don’t care if they’re bullied,” you’d expect the names to be really extreme, right? But they’re not. The parents have settled on Phoenix and Griffin for their twin sons. The grandparents would much prefer traditional names, preferably with family ties. But, but, but …  it’s not their call. And also? These are perfectly mainstream choices for children born in 2022. Names cycle in and out of favor. Just like everything else. And that’s okay.

Also, the thing about warnings around bullying? It’s almost always this weird way of saying, “I don’t care for that name.” And did I miss something? The problem isn’t the name. It’s the bullying!

I love a big family with great names! Australian couple Chloe and Rohan Dunstan are parents to Evan, Otto, Felix, Rufus, Hank, Pearl, Sylvie, and Cosmo. OH – and they have a YouTube channel, where they recently shared that they’re expecting another girl. Waiting patiently to hear what they name the new addition, and wondering if there might be some hints here.

I’m so intrigued by Swistle’s suggestion in this post. They used an honor middle for their firstborn, and have an honor middle ready for their second. Except … their second is twins! And there really aren’t any names left, at least none that they love. Swistle floated the idea of using the same honor middle – Lucas – for both, and I find it surprisingly charming.

This story about how two Pepsi commercials influenced names in the US and India? Wild.

Can’t get enough name talk? Subscribe for the Tuesday newsletter, for more #namehelp questions, only-in-the-newsletter lists, and highlights of the week: