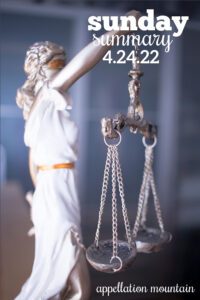 Just in case that alphabet soup is new to you, here’s a quick primer:

AITA allows posters to ask if they’ve been the @$$ho!e in a particular situation. The answers are as follows:

I’ve shared a few of these stories in past Sunday Summaries. They’re complex, and they tend to result in interesting discussions, too.

AITA for telling my husband his name suggestion for our unborn baby is idiotic at best?

AITA for “tricking” my SIL about baby names?

Husband’s younger sister is always badgering family members for information, including the name they planned for their new baby. Fed up, they finally gave her a fake name, which she promptly shared with everyone. Now the baby is here, with the name the couple always intended to use and never shared, and the SIL is upset she’s been tricked.

While the situations can be complicated, I feel like it’s very possible to go through life without triggering a post to the AITA forum. At least when it come to baby names.

RULE ONE: RELATIONSHIPS OVER NAMES.

Do you have to avoid a dozen names because your sixteen year old cousin has called dibs? No. Of course not! But if you and your close friend are both expecting at the same time, and you’d both like to name your sons Charles, well … it’s worth a conversation and a compromise. Because you can find other names, but repairing a relationship? That’s hard work.

This goes both ways, of course. If it turns out that you’ve inadvertently given your child the same name as your brother’s awful boss, well … his relationship with his niece will endure while the boss will (hopefully) not be part of his story in a few years.

It’s not about making your case that you’re NTA and the other person is all kinds of wrong. It’s about listening to honest concerns or wishes. Because no, you don’t have to hand down that long-time traditional family favorite. But you do have to listen to your mother-in-law tell you that Uncle Alvin was a great man, and it’s a shame his name isn’t being used.

When in doubt, put the focus on the family you’re building – you, your partner, and this precious new life. They’re your first priority. If it means disappointing your grandmother because you don’t choose a saint’s name or breaking his family’s streak of everyone sharing the initial J, that’s okay. Start fresh for your growing family.

Will those rules solve every problem? Probably not. But *hopefully* they can take the edge off, reducing it from an AITA-worthy scenario to a much more manageable discussion. So even if someone in your life thinks YTA, you can rest easy knowing you’ve done your best.

And while we’re talking about nicknames, Nate Bargatze’s story made me laugh out loud. I remember coaching my daughter to give her full legal name, NOT her nickname at security when she was old enough to hold her own boarding pass … but not yet old enough to roll her eyes and say, “mom, I know!”

There’s a new character coming to the Archie universe. Her name is Eliza Han. It’s fascinating to me because, of course, Betty is the Elizabeth name that was ever-so-stylish when the series debuted way back in 1941. But now that title belongs to another Elizabeth name, Eliza. And the two can exist in the same series without feeling like they’re too close. One of the reasons long-running franchises can be onomastically fascinating …

A belated congratulations to Nick Jonas and Priyanka Chopra on the arrival of their first child. While they welcomed their daughter in January, we’ve only recently learned that her name is Malti Marie Chopra Jonas. Malti is new to me; but it is, apparently a flower name, and there’s a celebrated Indian writer named Malti Joshi. The flower is also known as the madhumalti or the rangoon creeper, and it’s just plain pretty.