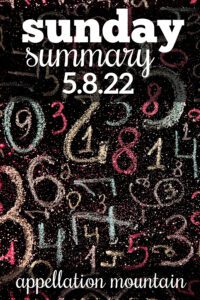 (Nearly) every year, the US Social Security Administration delivers an early Mother’s Day gift: an updated list of the Top 1000 most popular baby names.

And that means that Mother’s Day weekend turns into a feast of data and data analysis.

Sharing just a few of my favorites pieces so far:

Disney dominates the fastest-rising list. Or is that Disney+? For years, I’ve argued that television names prove more influential than movie names. Why? We hear television names again and again, usually over months if not years. We add them to our list of possibilities without knowing it. But now that we stream lots of movies – even new (or newish) ones, maybe they’re functioning more like television series. Then again, we watched Cars on DVD about a hundred thousand times, and I never considered naming a baby Lightning …

The most popular length for names? 6 letters. Between 5 and 7, actually.

Nancy also confirms that the top letters for our children’s names remain unchanged. It’s J for boys and A for girls.

Did you watch the Met Gala coverage? Photographer Annie Liebovitz brought one of her three daughters as her guest. The daughter’s name? Samuelle, presumably a nod to Annie’s father, Samuel. A plausible feminine form of Samuelle, it’s always taken a back seat to Samantha … but I like it very much.

A fun TikTok on how common – but confusing – nicknames came to be.

And if today is hard for you, for any reason at all?