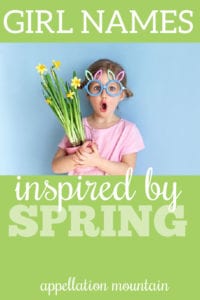 No surprise that many of these are drawn from nature. Others are borrowed from ancient goddesses or straight-up vocabulary words.

If you’re expecting a daughter from late March through early June, this list might include the perfect seasonal first or middle.

March comes in like a lion and out like a lamb. And lamb? That’s one of the meaning of Agnes. This overlooked vintage gem originally meant “pure,” but we associate it with the Latin word agnus – lamb.

Anthea means blossom, from the Greek word antha, for flower. In mythology, it’s associated with the goddess Hera, sometimes Aphrodite, and also used as a name for a goddess fo flowers.

The French word for April, Avril picks up on the stylish ‘v’ sound of Ava and Evelyn.

Why be content with one flower name when you can have the whole garden?

Because Chloe means green shoot, it’s perfect for a daughter born in springtime. It’s also a mainstream favorite, recently in the Top Ten and in the Top 100 since 1998.

A rising favorite, along with lots of other -ora choices, Cora belongs with spring girl names because it’s another name for the Greek goddess Persephone, who brings the seasons.

A Roman goddess of flowers, and a name that instantly brings to mind all things green and growing.

Hyacinth flowers are associated with spring. They’re popular decorations during Persian New Year festitivies, celebrated at the Spring Equinox. And TS Eliot’s The Waste Land refers to “the hyacinth girl” in springtime.

One of many flowers that blooms in the spring, Iris also makes this list because it’s the name of Roman goddess of rainbows. While rainbows aren’t exclusive to the season, all that rain makes them a regular occurrence.

We may not meet many girls named Hyacinth, but Jacinta, Jacinda, and Giacinta are romance language forms of the name that you may hear.

A gentle, spring-into-summer month name, June feels vintage and right at home in the twenty-first century, too.

A beloved flower name, with countless variations and formal forms, Lily’s long association with Easter puts it on this list of spring girl names.

The merry month is called May, but we tend to spell the given name Mae. It can sometimes be short for Mary or Margaret, but these days Mae tends to stand on its own. It’s a bright sound packed into just three letters.

Combined with the spelling Maya, this name feels effortlessly international and cross-cultural. But it makes this list because Maia was a Roman goddess of spring.

Catholic families probably know that May is devoted to Mary. That’s because May has long been associated with seasonal celebrations, pre-dating Christianity. Think of maypoles and crowning the May Queen – though many parishes now crown their statues of Mary instead. It’s a spiritually significant choice for a daughter born in springtime.

In Greek myth, Persephone spends half her time on earth, with her earth goddess mother Demeter, and half in the the Underworld, with husband Hades. When she returns to the land of the living, Persephone brings spring.

The Japanese word for cherry blossoms, a richly symbolic tree. In Washington DC, thousands of cherry trees were planted along the Potomac in 1910, a gift from Japan. The Cherry Blossom Festival takes place there every year in late March and early April, as the trees reach “peak bloom.”

Like Lily, Tulip is a flower closely associated with the season. And yet, we rarely meet girls with this distinctive flower name. (Fun fact: tulip comes from a Turkish name meaning “turban,” because of the resemblance to the flower.)

The Romanian word for a bluebell flower, Viorica sounds a little like favorites Victoria and Violet, but is far more rare.

What are your favorite spring girl names? 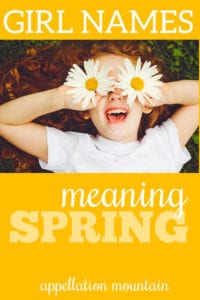