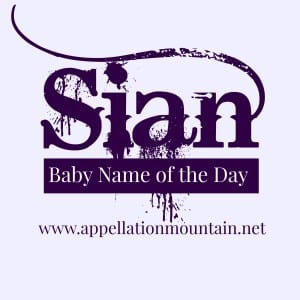 She’s more obscure than Jane, less familiar than Joanna.  But this feminine form of John could fit right in with stylish names for girls in 2014.

Thanks to Sian for suggesting her own name as our Baby Name of the Day.

Sian is the Welsh answer to Jeanne and Joan and Jane, too – a feminine form of the enduring John.  Strictly speaking, it is written with a diacritical mark: Sîan.

But how is it pronounced?

I’ve often heard Sian pronounced just like Sean or Shawn, sort of like a feminine form altered only by spelling, akin to Frances–Francis.  But that’s not quite correct.  Instead, Sian sounds more like the first syllable of Shannon or maybe rhymes with Don rather than Dawn.  But I’m guessing there’s quite a bit of variation in how real life Sians use their names, especially outside of the UK, and vowels are notoriously tricky things.  Ask any Andrea.

I’ve found a handful of references that connect Sian to Welsh myth and legend – but I can’t pin her down.

Could it be that she’s confused with a figure from Marion Zimmer Bradley’s wildly popular series of books set in Avalon?  Probably not – the character is a minor one, and appears in a much later installment in the popular anthology, so that seems unlikely.

Instead Sian first started to catch on in the US – though in a small way – in the early 1960s.  That might have something to do with Welsh actress Sian Phillips.  She’s a big deal in her own right – the Welsh BAFTAs present an annual award named in her honor, and she’s played many a memorable role, from Livia in I Claudius to Miss Havisham in Great Expectations.

But Phillips also made headlines in the US because she married Peter O’Toole in 1959.  O’Toole starred as Lawrence of Arabia in 1962 – a major box office hit, and a career-making role for which he was nominated for the Academy Award for Best Actor.

1962 was also the first year Sian was given to five girls in the US.

She’s seen steady use ever since, though in small numbers.  Around a dozen girls received the name most years into the 1990s, inching closer to 20 in recent years.  Chalk it up to a few things:

If you’re after a Welsh heritage choice that is distinctively different without being too difficult to wear, Sian is one to consider.