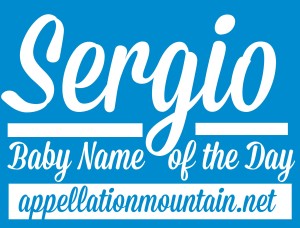 It’s the Spanish and Italian form of an old saint’s name.  If we’re naming boys Matteo and Marco, why not this one?

Thanks to C in DC for suggesting the World Cup-inspired Sergio as our Baby Name of the Day.

Take a widely-admired ancient saint, add a half-dozen major European languages, and chances are that you’ll find an equivalent in every single one.

Except now and again there’s an exception.

Saint Sergius lived in the 300s, primetime for Christian persecutions.  Legend tells us that he was a Roman citizen, and a soldier of high rank.  In fact, Sergius might come from the Latin serviens – servant or soldier.  Along with fellow officer Bacchus, he converted to Christianity.  The timeline is a little fuzzy, but eventually their beliefs are found out.

They were humiliated and tortured.  Bacchus died quickly, but Sergius was beheaded.

Historical evidence for the pair is sketchy, but they’ve been venerated since the 400s.  Resafa, in modern-day Syria, is said to be where the pair met their death.  The town was once known as Sergiopolis, and the ruins of the Basilica of Saint Sergius are still visible.

The saint was very popular at one point, and between the seventh and eleventh centuries, four popes took the name.  Variants are found in many European languages:

The name might bring to mind Sergio Valente jeans, designer denim originally from the Jordache era.  There never was a Mr. Valente behind the label, though – it was an invented name.

Now there is a real Sergio Valente, a Portugeuese-born footballer who plays for Malaga CF.  This Valente is better known by his nickname, Duda.

If you followed the 2014 World Cup, another name almost certainly comes to mind:  Argentine player Sergio Aguero, known as Kun.  Most of the time, he’s with Manchester City in the UK.  But the Buenos Aires-native also played striker for the Argentine national team.  They lost to Germany in the 2014 World Cup final, but Aguero was much in the news for an injury that kept him benched earlier in the series.

So how would Sergio wear in the US?

Except that Sergio actually peaked in the mid-1990s and is falling in use.  Like Diego, this name sounds fresh to my English-speaking ears – but perhaps he feels tired to native Spanish speakers?  The name has also been big in Spain in recent years.

If you’re looking for a name rich with history and use, but unlikely to be shared in the US, Sergio and company could be a cluster of names to consider.