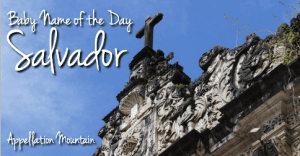 It’s a traditional choice in many languages, but relatively rare in English.

Thanks to Christina for suggesting Salvador as our Baby Name of the Day.

The Spanish Salvador and the Italian Salvatore both mean savior.

It comes from the Late Latin salvator – one who saves. While it’s sometimes used to describe heroic acts, it’s more typically a spiritual salvation.

A savior rescues others from the consequences of sin. While Christians consider Jesus the savior, the concept is by no means exclusive to Christianity.

For a person of faith, Salvador could be a meaning-rich choice. The name also feels creative, thanks to Salvador Dali. Born in Catalonia, Spain in 1904, he was named after his father, as well as his older brother, who died before his birth.

Dali became one of the most prominent artists of the twentieth century, and a leader of the surrealist movement. He was also a master attention-getter, known for his flamboyant personality as much as his artistic talent.

Then there’s the tiny Central American nation of El Salvador.

It was known as Cuzcatlan from the tenth century until the conquistadors arrived. Local resistance was fierce. The leader of the invasion, Pedro de Alvarado, renamed the territory at some point in the 1520s. Officially, the Spanish called it Provincia De Nuestro Señor Jesus Cristo, El Salvador Del Mundo. The name stuck in a shortened form. 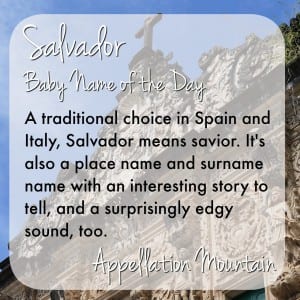 Names often reveal a person’s background – but not always. Francis Salvador was born in London to parents originally from Spain. He was Jewish, and would eventually move to the New World, become a major landowner in South Carolina, and be the first Jew to hold elected office in the colonies, and later, the first Jew to die in the American Revolution. A memorial to him stands in Charleston today.

In the twentieth century, a guy called Sal was probably Italian, and named Salvatore. Think of The Sopranos character Sal Bonapensiero, or Oscar-nominated actor Sal Mineo.

There’s a Salvatore family in The Vampire Diaries, books and television series.

The Spanish form has been in steady use since 1900. While it was never quite as popular, in recent years it’s become the more familiar form. The -ador version currently ranks #600.

At lest two musicians have chosen the name for their son – Radiohead guitarist Ed O’Brien, and singer Chantal Kreviazuk and her musician husband Raine Maida.

The name has a sort of edgy feel. It’s laden with meaning, but so are Bodhi and Legend and Messiah – all Top 1000 choices. It seems like a substitute for Sebastian, a crossover name less expected than Mateo.

If you’re looking for an unexpected name that works in English and Spanish, appreciate the spiritual sense of the name, and like the idea of choosing something longer that wouldn’t necessarily be shortened, Salvador could be the name for you.

What do you think of Salvador? Would it wear well in 2016?