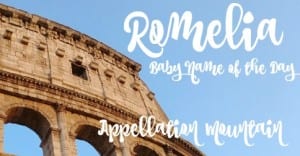 It’s a rarity with that stylish -lia ending.

Thanks to Christina for suggesting Romelia as our Baby Name of the Day.

Romelia may be rare, but it’s definitely been in use in the US.

Most of the sources suggest that this is a Spanish name, and two uses back that up:

I hid dead ends searching for more information in both countries, but it’s enough to make it seem likely that the name is used primarily by Spanish-speakers – and not very frequently today, though I did find plenty of women by the name.

There are a handful of names that sound like Romelia, and that suggests a few other possible origins.

First, there’s Romilda, which comes from the Germanic elements meaning “famous” and “battle.” A fierce meaning, and JK Rowling gave the name to a fellow Gryffindor classmate in the Harry Potter series. Romilda Vane fought on the side of Dumbledore’s Army during the Battle of Hogwarts.

The Visigoths brought plenty of Germanic names to Spain. Their reign lasted from the fifth to eighth centuries, so it’s easy to imagine Romilda softening to Romelia over the centuries.

I think Romilda is a far more likely origin story for the name than Remaliah.

But the name also brings to mind Roma, the Italian name for the eternal city of Rome. Romanus was a given name meaning “from Rome” that evolved in Latin. Romania might be a more likely elaborated form, but I don’t know that we can rule out Romelia. 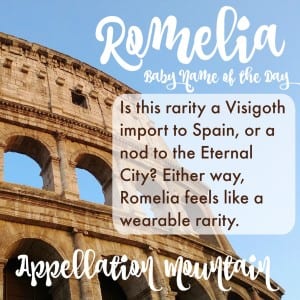 Because here’s the thing: Romola is the feminine form of Romulus. Which definitely means “of Rome,” since he and his twin brother Remus are the city’s legendary founders. Romilius is another related name, and the origin of the French surname Romilly.

And, of course, Roma – as in actress Roma Downey – has some history as a given name, too.

So there’s no definitive origin for Romelia. In my attempts to read Spanish-language resources, it looks like they’re divided between Romilda and Roma, too.

Putting the question of origins aside, this name is just plain gorgeous:

Romelia isn’t likely to be the next Top 100 name in the US. But it is an intriguing, wearable rarity that brings to mind one of the most historic cities in the world, and has other possible origins, too.

What do you think of Romelia? Would you consider the name for a daughter? Also, I’d love to hear from Spanish-speaking readers – any insight as to the name’s origins?