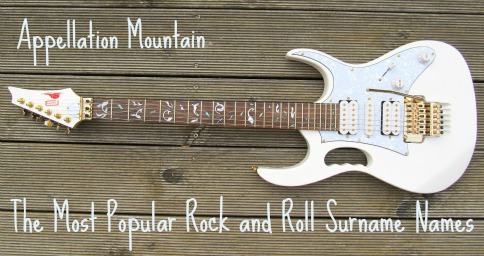 Are there any rock star surname names on your shortlist?

“Heroes” by David Bowie is my favorite song, and if I were expecting a son right now, I’d seriously consider how to incorporate Bowie into his name. It wasn’t on my radar until we heard that the legendary artist had passed away earlier this week. But now? It seems like the most obvious of choices.

Rock star surname names are a big category, and they’ve gone mainstream in recent years. They work on so many levels: surnames are stylish choices for children in general, and these are surnames rich with personal meaning.

I’ve looked at all of the rock star surname names before, but I thought it was time to look at them by popularity in the US. This list is based on 2014 data. My guess is that we’ll see a big increase in the use of Bowie when the 2016 data comes out – but that won’t be until May 2017.

What counts as a name in this category? Plenty of names with ties to rock ‘n’ roll are first names, like Elvis and Axl. They’re not on this list. And I dropped a few that didn’t seem directly tied to the name’s popularity. Jackson brings to mind King of Pop Michael, but I haven’t heard many parents reference him in their name choice. Cooper is popular, but I don’t think there’s much connection to Alice, and I don’t think Harrison is directly tied to George.

With those caveats, read on for the twelve most popular rock star surnames in the US. 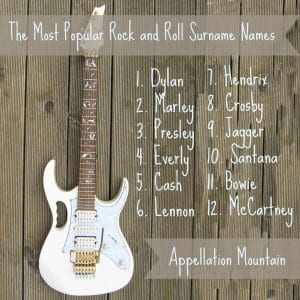 Coming in at #12 is McCartney, as in Sir Paul. He and fellow Beatles founder John Lennon were one of the most successful and influential songwriting duos of the twentieth century – maybe of all time.

In the 1970s, Paul co-founded Wings. Wings was wildly successful, too, paling only in comparison to his first group.

The surname traces its roots to Scotland and Ireland, where it ultimately comes from a personal name that could mean bear – or hero. Either way, it was given to 21 girls in 2014, enough to make it #12 on the list of rock star surname names. Along with Mckinley, McCartney is one of the Mc- names rising as former favorites like Mackenzie fall. It’s possible that some parents were inspired by the early 2014 arrival of Gwen Stefani’s third son, Apollo Bowie Flynn. Stefani said that Bowie and Flynn were family names, and indeed, they’re both common. Bowie also brings to mind Jim Bowie – as in the knife.

Like McCartney, the name has roots in Scotland and Ireland. It is typically given the meaning “fair-haired.”

David Bowie was blonde for much of his career, but the charismatic singer was best known as a chameleon, an innovator who changed styles and pioneered sounds.

One more reason to imagine this name will rise: with Bowen and Beau on the upswing, it’s a sound that was already on trend.

I almost missed Santana on my first pass through the list. After all, this name has been more famously connected to a tough-as-nails cheerleader on Glee in recent years.

But the Spanish surname – a contraction of Santa Ana, places name after Saint Ann – is actually much more popular for boys than girls. This makes me think that Carlos Santana, the Mexican-born musician, is the driving force behind the name’s success.

Carlos gave his surname to his band, Santana, and they performed at Woodstock way back before they even had a record deal. Since then, he’s racked up 10 Grammys and is widely considered one of the greatest guitarists of all time.

The name sounds, well, jagged. Edgy even. But it’s not a rock and roll stage name. Mick was born Michael Philip Jagger. It was an occupational name for a peddler, from the Middle English word jag – pack.

It’s seen sparing use as a given name since the 1990s. But it was a song by another band that pushed Jagger to its highest rank ever.

In 2011, Maroon 5 scored a hit with “Moves Like Jagger,” an a video chock full of archival footage of a young Mick. One year later, a record 466 boys had been given the name.

Does Crosby belong on this list? The name’s current claim to fame isn’t musical, but athletic – Sidney Crosby is an ice hockey star, currently playing for the Pittsburgh Penguins.

But there are two reasons this name is musical. First, there’s crooner Bing Crosby. And second, the reason it belongs on the rock and roll surname names list, is David Crosby, an alum of the Byrds, best known as a member of Crosby, Stills, and Nash. That makes him a two-time inductee into the Rock and Roll Hall of Fame.

431 boys and 28 girls were given the name in 2014. Maybe it’s a mix of the musical, the athletic, and the small screen’s influence that has pushed this surname name into wider use. Lucky number seven is Hendrix, as in Jimi.

In just four years, he recorded some of the most enduring hits in rock and roll history. It’s impossible to talk about electric guitar without bringing up his name.

And yet, this name isn’t only about the legend. Even without Jimi’s legacy, Hendrix boosts that great final x, just like Alex and Felix and many other popular names for boys. And we’re mad about Henry, the given name from which Hendrix is derived.

Is Lennon meant for a boy or a girl?

John Lennon is remembered for his music, both as a member of The Beatles and his solo work. But he’s also remembered as a peace activist whose life was tragically cut short, following his 1980 assassination. Strawberry Fields in New York City’s Central Park, not far from the entrance to the apartment building where Lennon was fatally shot.

The surname has a few possible origins, all Gaelic – little cloak, blackbird, or possibly sweetheart. But the name has taken on a meaning that’s about the songwriter’s interests: peace and possibility. If Lennon is a gentle, gender-neutral name, the rock star surname that stands at #5 on our list is the opposite.

Cash is brash, a bad boy name inspired by the Man in Black. Johnny Cash’s music has endured long after his 2003 death.

As a given name, the surname started to rise following Cash’s death. But it was really the award-winning 2005 biopic, I Walk the Line, starring Joaquin Phoenix and Reese Witherspoon and Johnny and June Carter Cash that pushed the name into wider use.

The singer cultivated an outlaw image, but his surname actually has a gentle meaning. It’s generally considered an Anglicized form of German surname Kirsch – cherry, or perhaps Kirch – church. It’s got nothing to do with money, but it probably doesn’t hurt that Cash is king.

If Cash is all-boy, Everly is almost all girl. That’s despite the earliest high profile use of the name by rocker Anthony Kiedis, who named his son Everly Bear back in 2007.

But the name had been used in small numbers for girls for years. It might have something to do with the musicians, but it’s also a logical name for a girl. It shortens to Evie, and we’ve long loved three-syllable, ends in -y or -ie names for girls, from Dorothy to Kimberly.

But it is a name with rock and roll roots. The Everly Brothers, Don and Phil, were inducted into the Rock and Roll Hall of Fame in 1986. They scored a string of hits in the 1960s, upbeat anthems like “Bye Bye Love” and “Wake Up Little Susie.”

The surname comes from an English place name, composed of the elements wild boar and clearing. It’s certainly more appealing to think of it as a musical choice!

In 2013, actors Channing Tatum and Jenna Dewan gave the name to their daughter. The name had already been catching on quickly, but the high profile birth announcement sent Everly soaring to #178.

We do love those ends in -ley names for girls, from Ashley and Paisley to the third most popular rock and roll surname name on our list: Presley.

Presley needs no introduction. The surname of the King of Rock and Roll, it comes from either an English place name or maybe a German one. But it means just one thing: Elvis.

The Mississippi native became a major recording star in the 1950s, a movie star in the decade following, and then made a comeback in the 1970s. He died in 1977, but remixes of his songs have topped charts as recently as 2002 and 2003.

This name is more popular for girls – there were over 1,700 newborn girls named Presley in 2014. But it’s not unknown for boys, with a respectable 141 boys called Presley the same year.

Marley makes this list because it’s the surname of the immortal Bob Marley, who brought reggae to the world. More than three years after his death, Marley remains among the best-selling and most influential artists of all time.

And yet, the name might owe its success not to the musician – but to a dog.

Originally an English place name, the surname has a long history of sparing use as a given name for boys and girls alike. It was already on the upswing when John Grogan published Marley & Me: Life and Love with the World’s Worst Dog. The memoir became a bestseller, and inspired a 2008 movie adaptation with Owen Wilson as Grogan.

It suggests that the dog has carried the day. But if I were a Marley? I think I’d rather be named after the singer. In 2014, there were over 1,900 children given the name, with more than 1,600 of them girls.

Bob Dylan took his stage name from Welsh poet Dylan Thomas, making this a first name that traveled to the last spot and back in record time.

A handful of boys were named Dylan in the 1950s, their parents likely influenced by the poet, too. But the name really took off in the 1960s, as the singer-songwriter rose to international fame.

It seems likely that modern Dylans – of which there have been in excess of 50,000 born in just last five years – may owe less to Bob, and more to the name’s reputation as a solid choice for a son.

Or a daughter. Ralph Lauren named his only daughter Dylan in 1974. She gave her name to a successful candy store, Dylan’s Candy Bar. While this name has always been far more popular for boys, a steady current of girls have also worn the name.

As of 2014, there were 10,350 newborn boys and 822 newborn girls named Dylan – enough to make this the undisputed #1 on our list of rock and roll surname names.

What are your favorite rock star surname names? Would you consider any of the names on this list?