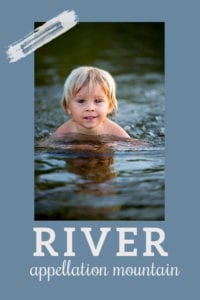 The baby name River combines our love of the outdoors with a spiritual side.

Thanks to Felecia for suggesting our Baby Name of the Day.

Before the baby name River was ever given to a child it was – obviously – a word with Latin origins.

Riparius referred to a riverbank; it was corrupted into Old French as riviere, and came to refer to the river as well as the edge. The Normans brought the word to England, where it became rivere and eventually the word we know today. Coastal areas with like the Riviera hint at the word’s original meaning.

THE RUBICON AND THE JORDAN

You can be sent down the river (to prison) or experience peace like a river (like the hymn).

When Julius Caesar crossed the Rubicon (river), it changed the course of the world. We personify rivers, like the Ol’ Man of the Mississippi. Countless early Christians were baptized in the Jordan River – including Jesus himself.

So rivers symbolize journeys and boundaries. They give life and drive commerce. Individual rivers have shaped the world as we know it.

A handful of children received the baby name River in the 1970s.

It was a counterculture kind of name, along with Summer and Rain, Liberty and Freedom. After all, the Phoenix family chose several of those names for their children … along with River.

Born in 1970, River Phoenix became a star in 1986’s Stand by Me. By the time he passed away in 1993, he’d already earned an Oscar nomination and a shelf of awards, particularly for his performances in Running On Empty and My Own Private Idaho.

The actor’s death in 1993 changed everything.

Six boys received the baby name River in 1971. A decade later, six boys were named River in 1981. The name would’ve felt extreme. Even as Phoenix’s career flourished, only a handful of parents considered the name.

While River Phoenix gets credit for the name’s surge in popularity, it wasn’t just the actor.

A few nature – or nature-adjacent – names have always ranked in the Top 1000. We’ve always named our daughters after flowers and gemstones – think Ruby and Rose, Lily and Pearl.

But the 1990s were also the decade that Sage caught on for boys and girls alike; that Rowan debuted for boys and Aurora rose for girls.

River’s r-ending helped sort the name into the boys’ category. After all, Christopher, Tyler, and Connor were favorites in the era.

Then science fiction on the small screen gave us two high-profile female Rivers.

In 2008, we met the mysterious Dr. River Song on Doctor Who. It’s tough to explain Song without, as she would say, “Spoilers!”  Let’s just say this: she’s a critical part of the story line for every major character in her part of the series, in almost unbelievable ways.

In September of 2020, we learned that Joaquin Phoenix – younger brother to River – and fiancee Rooney Mara had welcomed a son.

While they’re not the first high profile couple to choose the name for a child, no question it’s the most significant.

The name succeeds for so many reasons. The middle ‘v’ is powerfully stylish. And the mix of nature name appeal and deeper meaning is exactly right for our times.

It’s easy to imagine parents from so many walks of life embracing this name for a child.

Would you consider the baby name River for a son or a daughter?