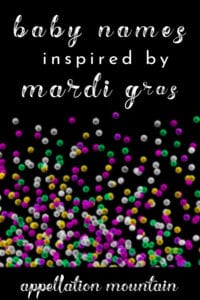 There’s something about the Louisiana city. Credit Anne Rice or zydeco, jambalaya or dozens of movies and television series. It’s nowhere near as big as Paris or Los Angeles, but New Orleans competes with the most storied cities on Earth in our imaginations.

Mardi Gras means “fat Tuesday” – it’s the day before Ash Wednesday, one last day of excess before a season of repentance for many Christians.

But in New Orleans, it’s an entire season.

It begins on January 6th – the Feast of the Epiphany, or Three Kings Day. Epiphany falls twelve days after Christmas. Tradition holds that that the Three Wise Men visited the newborn Jesus on January 6th.

The exact date of Ash Wednesday moves around – quite a bit! – and so the season can be longer or shorter. It’s marked by parades, hosted by krewes – local civic organizations. They parade, and some also support charitable endeavors and grant scholarships, too.

Visit New Orleans any time of year, and the Mardi Gras spirit is alive. Whether it’s the colors – purple, gold, and green – or symbols like beads and other give-aways, the season dominates our ideas about the city all the time.

Of course, Mardi Gras isn’t unique to New Orleans. Plenty of places celebrate the carnival season. But few cities are so closed associated with the traditions and customs.

And so let’s look at Mardi Gras baby names that celebrate this unique and vibrant city.

You know them better as the Cajuns, but back in the 1700s, they were Catholics who left France to settle in Canada. The British told them to convert – and swear allegiance to Britain – or else. Many of the Acadians headed south to New Orleans. The term Acadiana is often used to describe all of Francophone Louisiana. It’s rare as a given name, but fits right in with Olivia and Sophia.

We associate Mardi Gras – and all of New Orleans – with green, purple, and gold. But Bob Dylan’s “Tangled Up in Blue” talks about how he “drifted down to New Orleans.” There’s also “Blue Bayou,” a Roy Orbison song that became a signature favorite for Linda Ronstadt. It doesn’t mention the city expressly, but the place name is used around Louisiana. And so this color feels like it pushes the color onto the list of Mardi Gras baby names.

The Krewe Bohème is one of the earliest parades to take place every year. Members are inspired by all things artistic and bohemian, and instead of a traditional King and Queen, they’re led by a Green Fairy.

A calliope is a steam-powered pipe organ associated with river boats. They can still be heard in the Crescent City. There’s also a Calliope Street in Uptown. More on that under Clio.

Looking for something elaborate and unusual, maybe as a Mardi Gras-inspired middle?  The surname of a former Louisiana governor was the name of a canal and continues as the name of a street. Pronounce it the French way, cahr on de lay. Or maybe not.

Back before anyone had heard of grunge, Seattle’s Mother Love Bone recorded “Chloe Dancer,” about a waitress in the French Quarter.

Naming your kiddo Lestat would be over-the-top, but Anne Rice’s Interview with the Vampire also gave us Claudia. It’s a classic name that’s been overlooked in recent generations.

Famous as the name of a legendary Egyptian queen, Cleopatra makes the list because it’s the name of a krewe – one of the organizations that parades during the Mardi Gras season.

In Greek myth, nine minor goddesses were responsible for creativity and inspiration. Each and every one of them has a street named in their honor, including the very wearable Clio, Calliope, and Thalia, as well as their slightly less accessible sisters: Erato, Euterpe, Melpomene, Polyhymnia, Terpsichore, and Urania.

One of New Orleans’ many nicknames? The Crescent City, so called because of the bend in the Mississippi River. This is no novel marketing campaign name, either – it was recorded as far back as 1835. While Crescent seems like an unusual choice as a given name – and it would be, indeed – Marissa Meyer’s Lunar Chronicles series used it for a character.

A lovely French import with plenty of potential, Delphine feels like an undiscovered gem ready for the spotlight. And it dose have deep ties to New Orleans. The only problem? The best known Delphine was a truly repugnant serial killer. And yet, plenty of other Delphines can be found in Louisiana. Like Amenaide and Clemence, it sounds like a New Orleans name.

Longfellow’s tragic poem of the Acadian expulsion is titled Evangeline. It’s also the name of a Louisiana parish.

It’s the French word for flower, boosted by the Harry Potter heroine, Fleur Delacroix. The New Orleans connection comes from the fleur-de-lis, a stylized lily, a symbol associated with the city. Lily (or Lilly or Lillie) might be options, too.

Elegant Iris is another krewe, the oldest one composed entirely of women. They took their name from the Greek goddess of the rainbow.

State names have a long history of use as firsts, from Georgia to Montana. While Louisiana is seldom heard, it has potential – especially thanks to nicknames like Lulu and Lucy.

Nola comes from New Orleans, LA, the abbreviation for the city. Another bonus? Magnolia is the state flower of Louisiana, and a possible formal name for Nola.

Few movie scenes can top Marlon Brando screaming “Stella!” in the 1951 big screen adaptation of A Streetcar Named Desire. It’s one of the best movies set in New Orleans, ever – even 70 years and counting after it was made.

Maybe this is a stretch. But way back when, Storyville was the red light district in New Orleans. Originally intended to contain prostitution in a manageable area, it eventually became a center for jazz in the city. Nearly a century after much of the neighborhood was demolished, there’s a certain romance to the name.

Bayou Street is New Orleans’ oldest road. But the bayou isn’t urban – it’s a marsh or swamp. (If you’ve seen Disney’s Princess and the Frog, you’ve got the general idea.) With names like River and Kai on the rise for our sons, why not Bayou, too?

New Orleans is known for its many world-famous restaurants. Not only are there several restaurants named Brennan’s – and have been for decades – one of them is said to be the home of bananas foster.

St. Charles Avenue and its streetcar line is as iconic as it gets. And while Charles seems pretty buttoned up, this street is one of the main Mardi Gras parade routes.

Strictly speaking, they’re krewes, with a K and an extra ‘e’ at the end. But rising favorite boy name Crew could be a nod to the New Orleans tradition.

Celebrity chef Emeril Lagasse is one of the city’s most famous sons. Except he’s actually from Massachusetts. No matter. Emeril started his career in the city, under the tutelage of Paul Brennan, Sr. at Commander’s Palace – one of New Orleans’ most famous restaurants. He’s known for bringing Creole-inspired cuisine to the wider world.

An Italian form of James, Giacomo makes this list of Mardi Gras baby names thanks to “Iko, Iko.” The Mardi Gras anthem was originally titled “Jock-A-Mo.” Yup, Jock-A-Mo. Which is how it appears in the lyrics. Not Giacomo. But still, it’s probably far more name-like as Giacomo.

If you’ve seen pictures of the Crescent City, you’ve almost certainly seen Jackson Square. Andrew Jackson, seventh president of the United States, led troops to victory in the Battle of New Orleans during the War of 1812. A statue of Jackson stands in his honor. Now located in the heart of the French Quarter, with St. Louis Cathedral in the background, it’s one of the most famous images of the city.

Another name borrowed from Anne Rice’s family of witches.

There are kings of carnival, and King Cakes are a traditional dessert served during the celebrations.

The name of three French medieval saints – you might seen them referred to as Landericus – St. Landry Parish isn’t far from New Orleans.

As in the cathedral, the square, and Louis Armstrong.

We think Hogwarts, but the musical Neville Brothers – and plenty of other famous Neville family members – are part of the city’s rich musical tradition.

Another famous New Orleans street, and a regal choice for a son.

The Krewe of Rex is arguably the most established of the Mardi Gras Krewes. It’s their parade that caps off the festivities on Mardi Gras itself. Rex is Latin for king, and the King of Rex rules the celebration.

A city in the south of France, the name Toulouse was first recorded in the second century BC, and has remained little changed since then. French artist Henri de Toulouse-Lautrec makes it feel a little more name-like. But it fits with Mardi Gras baby names thanks to New Orleans’ Toulouse Street, running through the French Quarter.

Walker sounds like the name of a Southern gentleman. Author Walker Percy was born in Alabama, but set many of his most famous novels in New Orleans.

What do you think of Mardi Gras baby names? What would you add to this list? 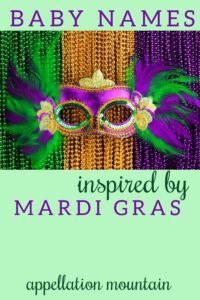 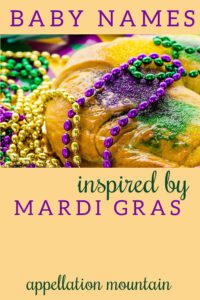