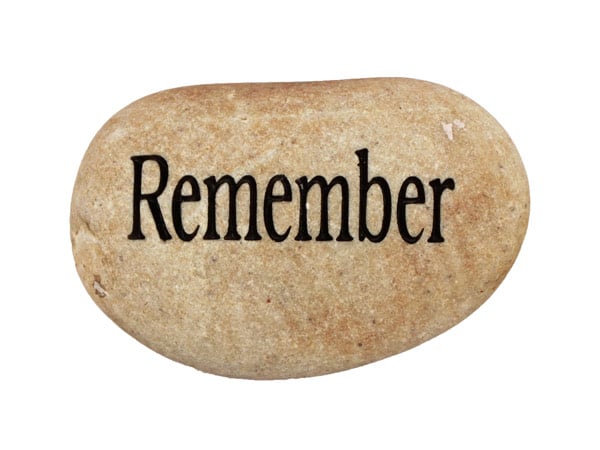 It’s another word name with a virtue vibe.

Thanks to Catherine for suggesting Remember as our Baby Name of the Day.

If you’re thinking that Remember sounds like a Pilgrim name, you’re exactly right.  Remember Allerton was five when she crossed the Atlantic to Plymouth Rock with her parents, Mary and Isaac, sister Mary and brother Bartholomew.

It’s even more of an Americana name than you might imagine, though – Remember Baker was a member of the Green Mountain Boys, a cousin to Ethan Allen, and was involved in ensuring Vermont’s independence from neighboring states.  Remember died on a scouting expedition in 1775, but the Green Mountain Boys – and Ethan Allen – went on to play key roles in the American Revolution.  Where did Remember get his name?  He was actually Remember Baker, Jr.  He and wife Desire named their only son Ozi, but I can find other men named Remember in Vermont later – cousins, maybe?

In any case, the name is exceedingly rare.  It has never been given to more than five children born in the US in a single year since we started recording the data in 1880.

As a word, it comes from the Latin rememorari – also the source of our words memory and memorial.  It means to recall, to keep in mind, and we’ve given it something of a poetic, romantic sense, too.  We remember the milk, but we also have days to remember, and we remember loved ones who have died.  It’s a verb that can feel like a command, and one weighted with meaning – remember those who have gone before you, remember what we have lost, remember my name, remember the time.

Song titles from Irving Berlin to John Lennon, poems, novels and stories use the verb liberally.  Remember? was an 1939 romantic comedy starring Greer Garson and Robert Taylor.  Movies aplenty have use the verb in titles, too, from I Remember Mama to Remember the Titans.

Memory is just as meaningful a name, but it has been more popular in recent years, sometimes respelled Memorie.  Maybe that’s because we’re fond of three-syllable, ends-in-ee names for girls, like Serenity and Trinity.  Or blame it on the mournful song from Cats.

Or maybe Remember just hasn’t had its moment.

Remember wears as well as many a word name.  It feels like other longer, ends-with-r names for boys – think of Alexander and Oliver, but also for girls – Jennifer and Juniper.  It shortens to Rem, Mem, and Remy, all of which work for either gender.  There’s something strong about Remember, and something unexpected, too.  But with ties to American history, and famous bearers both male and female, there’s plenty of reason to consider this name.

If you’re after a richly meaningful middle, Remember is a possibility.  But it has potential in the first spot, too, a classmate who will fit right in with Chance and Faith and Genesis.