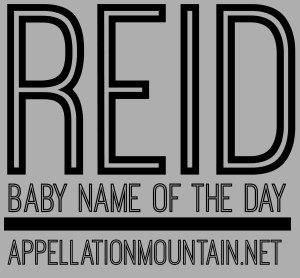 Looking for a short boys’ name that is still long on style?

Thanks to Amanda for suggesting her son’s name for our Baby Name of the Day: Reid.

There’s something polished and preppy about Reid.  He fits with long-standing choices like Jude and more modern ones like Gray, too.

There’s also Reed, another possible spelling nearly as popular and every bit as valid.  Reid tends to be Scottish, while Reed is more conventionally English.

The ‘ee’ spelling takes the name in other directions, too.  Reeds are the tall, grassy plants that grow near water.  If you’re “thin as a reed,” you resemble the slender plant.  Woodwinds like clarinets and oboes require a flat piece, known as a reed, and originally sourced from the plant.  This lends the name a nature-name vibe, as well as musical note, especially with the double-e spelling.

As with many surnames, there’s more than one possible origin:

Plenty of spellings have been used as surnames over the centuries, so it is no surprise to find Reid and Reed occasionally promoted to given name status over the years.

But in recently, they’ve gone from sometimes-used to rising stars:

Add them together, and that’s over 2,300 newborn boys – about as popular as Axel or Theodore.

Fictional bearers of the name include:

Reid Hoffman is the co-founder of LinkedIn.  And Ron Howard named his son Reed all the way back in 1987.

Add in the surname, and there’s actress Donna Reed, as well as The Brady Bunch’s patriarch, played by Robert Reed.  Music gives us Lou Reed.  US Army doctor Walter Reed gave his name to the medical complex outside of Washington DC.

All of this makes Reid a name with a lot of style in just a single-syllable: smart, but still vibrant.  Preppy, but approachable.  No wonder Reid – and Reed – are on the rise.

Which spelling do you prefer: Reid or Reed?  Do you think we’ll be hearing more of Reid in the years to come?