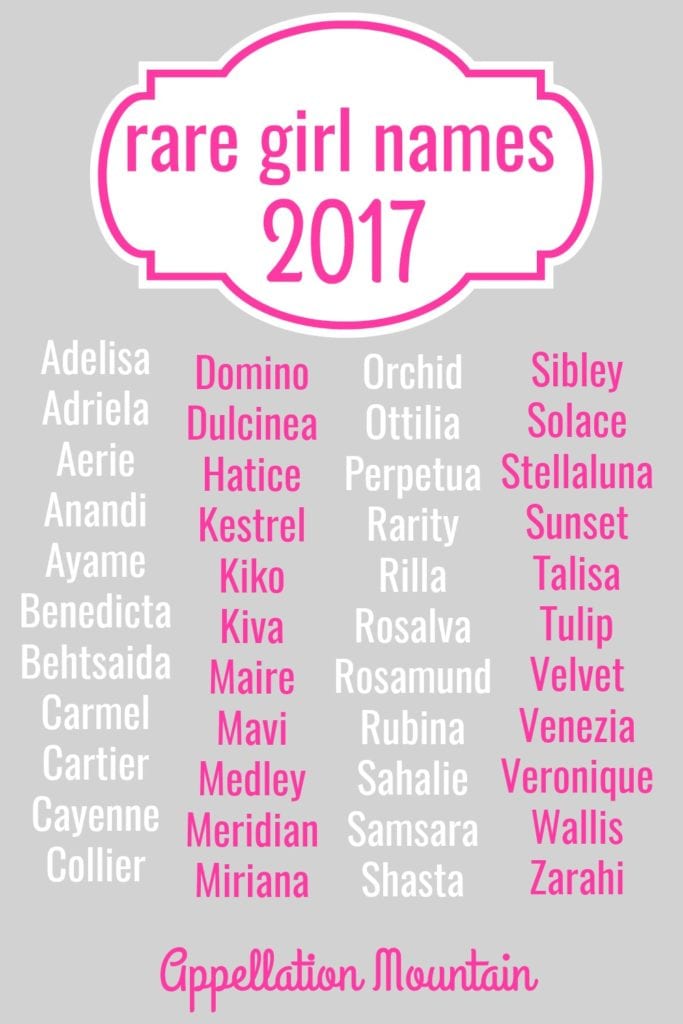 But in an age when even Top 100 names might be called “unique,” what makes a true rarity?

First, some facts: the US Social Security Administration reports on every name given to five or more boys or girls in a given year. (In other words, if four boys and four girls are named Raygun, that’s not enough to make the list. But five girls? That qualifies.) It’s possible to compile a list of names that don’t appear on the US Social Security list – Nameberry did a great one. And yet, some names might feel too rare, a name no one recognizes or knows exactly how to pronounce.

Where’s the sweet spot? That differs for every family, and I suspect many of these might feel too far from the ordinary for many parents. But I looked for names that felt wearable – at least for the boldest of namers among us.

For this list of rare girl names 2017, I’m focusing on names given to just eight girls between January 1st and December 31st of 2016. Over 19,000 girls were named Emma, the #1 name. And even at the end of the list, around #999 or so, roughly 264 girls share the name. By comparison, eight seems like a pretty tiny number.

The good news? Heaps of possibilities remain, from the familiar to the unknown, but still very wearable.

Adelisa – All of those Addie names include this intriguing rarity: Adelisa.

Adriela – There’s a minor Old Testament character known as Adriel, which leads to this feminine form.

Aerie – Nature names strike again! An aerie is a nest, especially for an eagle or another large bird of prey. Given our affection for all baby names avian, Aerie might fit.

Anandi – We love Felicity and Blythe, so why not Anandi? It comes from a Sanskrit word meaning happiness.

Ayame – A Japanese name meaning iris, Ayame is pronounced something like EYA-yah-may. Pretty, though it might present some challenges.

Benedicta – Ben names for boys are having a moment, and yet Benedict remains outside the current US Top 1000. That probably means Benedicta will stay delightfully rare, too.

Bethsaida – A possible formal name for Sadie, Bethsaida comes from a Biblical place name mentioned in the New Testament.

Carmel – Carmel means garden in Hebrew; one of Mary’s many titles is Our Lady of Mount Carmel. That makes this choice deeply spiritual, but also tailored and unexpected.

Cartier – Luxury brand baby names can create controversy. Think of Bentley and Armani. And yet, Cartier started out as a surname, the French equivalent of the very popular surname-name Carter.

Cayenne – Edible baby names range from the oft-derided Apple to the quite stylish Olive. Spicy Cayenne falls somewhere in between.

Collier – Back in the day, a Collier sold coal for a living. Today it seems like an intriguing surname-name option for a child, bringing to mind masculine choices like Colin, but also feminine ones like Colleen.

Domino – Ian Fleming gave the name to a Bond girl. Real life bounty hunter Domino Harvey was named for a French model. Socialite-turned-designer India Hicks gave the name to her daughter in 2007. It’s edgy, but relates to plenty of established given names, like Dominic and Dominique.

Dulcinea – Ultimately from the Latin dulcis – sweet – Miguel Cervantes invented this particular form of the name his masterwork Don Quixote. In 1994, indie rockers Toad the Wet Sprocket gave the name to a bestselling album. Dulce charts in the current US Top 1000, but Dulcinea remains rare.

Hatice – The Arabic name Khadija has history galore. It’s the name of Mohammed’s first wife, and the first convert to Islam. No surprise the name remains in heavy use, but the many forms it takes across different languages can astonish. Hatice is a Turkish form, but it also feels like a possible formal name for Hattie.

Kestrel – If bird names for girls are booming, how about Kestrel? A type of falcon, Kestrel feels a little more fierce than Lark and Wren.

Kiko – A Japanese girl’s name with several possible meanings, Kiko sounds like kee-ko. It’s rare, but possibly wearable given our love for o-ending picks like Margot and Willow.

Kiva – Kiva means unity in Swahili, but also connects to the Gaelic Caoimhe and a Hebrew name, too.

Leonela – Lionel often becomes Leonel in Spanish. Leonela developed as a feminine form. I like the possible nickname Nel/Nell.

Lilikoi – This looks like Lily plus Koi, an intriguing sound. But the Hawaiian name is spelled Liliko’i and sounds more like LEE lee ko ee … though I’ve found variations galore.

Maire – Either a Finnish name, or an Irish form of Mary, Maire takes a different pronunciation than you might guess. We know it as Moira in the US. Myra comes closer to the Finnish sound. Oscar-nominated actress Mare Winningham rhymes her name with dare.

Mavi – You might know Mavi as a brand of designer jeans. It’s also heard as a contracted form of Maria Victoria.

Medley – With musical names from Melody to Cadence to Aria faring well, Medley might work, too.

Meridian – Geography buff? Meridian might be the most wearable of names inspired by longitude and latitude. Alice Walker gave the name to a character back in 1976.

Miriana – Maybe Miriana feels like a Mariana switch-up. But I suspect it comes from the Latin mira – amazing, as in miracle.

Orchid – Yet another bold botanical, Orchid has been overlooked as a flower name. One reason? In Greek, the flower’s name comes from the word for testicles. It does give me pause, but the flowers are so widely known and admired, that it still might be worth consideration.

Ottilia – Yet another cousin to Otto, Ottilia might fit right in with so many stylish -lia ending names for girls.

Perpetua – A virtue name straight out of the ancient world, Perpetua is heard slightly more often in the UK. In the US, it’s a true rarity, though an early saint by the name might boost familiarity.

Rarity – Confession: I think Rarity might be tough to wear. But since I love virtue names like Amity, Verity, and Clarity, I couldn’t resist adding it to the list of rare girl names 2017.

Rosamund – Speaking of all those Rose names, can you believe that just eight girls were named Rosamund last year?

Sahalie – I’ve spotted variations on this word before, but never saw it as a name until now. Turns out Sahalie comes from Chinook, a Native American people of the Pacific Northwest. It means “a high and lofty place,” and might refer to heaven. Using Native American names presents a series of problems. However, some might discover this name thanks to Oregon’s Sahalie Falls. It certainly sounds like a girl’s name.

Samsara – Tired of Samantha? Naming a sister for Bohdi? Samsara fits in both cases. The Sanskrit word refers to the cycle of rebirth common to many eastern religions. Definitions vary, from the poetic “wandering through” to the technical “cyclical change.”

Shasta – A soda brand around since the late nineteenth century, Shasta borrowed its name from California’s towering Mount Shasta. As with Sahalie, the name’s roots are Native American; in the case, the name of an indigenous people native to Northern California. That might make this one unusable. And yet, CS Lewis gave the name to a (male) character, and a handful of places also use the name. Plus, there’s the shasta daisy, which makes this yet another floral option.

Sibley – With so many ends in -ley names for girls prominent, Sibley could fit right in. It evolved from the given name Sybil.

Solace – A word name and potential modern virtue name, Solace made headlines a few years back when a prominent Canadian politician’s granddaughter was given the name.

Stellaluna – I skipped most smoosh names near the bottom of the list – and there were many! But Stellaluna stands out. First, it’s the name of a popular children’s book series about a bat. Also, actress Ellen Pompeo named her daughter Stella Luna. The Latin words for star and moon make this an elaborate, night sky name for a child.

Sunset – Would Sunset make for yet another daring nature name possibility?

Talisa – Is Talisa a modern invention? Maybe, maybe not. Model-turned-actress Talisa Soto gets credit for making this name more popular, though it never reached the US Top 1000.

Tulip – Another unexpected flower name, Tulip might prove every bit as wearable as Daisy or Rose.

Velvet – Fabric names have never really caught on; Jean doesn’t count! But a few have seen some use, including Denim. Velvet seems close to the wildly popular Violet, and also brings to mind Elizabeth Taylor’s character in the enduring film classic National Velvet.

Venezia – The Italian spelling of Venice makes for an unexpected place name possibility.

Wallis – Bessie Wallis Warfield Simpson grew up to win the heart of a king – and cause a crisis in the monarchy. Known as Wallis Simpson, the American divorcee was judged unsuitable for a future King of England. Shortly after taking the throne, King Edward VIII abdicated in order to marry her. Actor Anthony Edwards has a daughter by the name.

Zarahi – Zarahi truly belongs with rare girl names 2017. I’ve found a handful of women with the name, but no definite origin. It may be a cousin to the Arabic Zahra, though the bearers tend to be Latina.

What are your favorite rare girl names 2017? Are there any you would consider using?