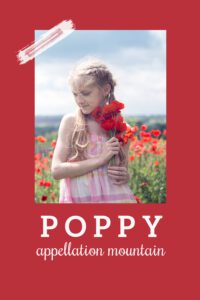 The baby name Poppy combines an upbeat sound and vibrant color with a powerful association.

The baby name Poppy comes straight from the flower.

And the flower? There’s no mysterious meaning or deep backstory.

In Latin, it is papaver.  In Old English, popæg.

It is tempting to link Poppy to Poppaea Sabina, second wife of Roman Emperor Nero. But it’s almost certainly just a coincidence.

The US celebrates Veterans Day on November 11th, in honor of the day fighting stopped during the first World War.

It’s called Remembrance Day elsewhere in the English-speaking world. While it’s less common in the US, the poppy is broadly associated with commemorating veterans and those who lost their lives in war.

As the war ended, wild poppies grew in the fields where so many lost their lives.  Two poems cemented the connection: Canadian John McCrae’s In Flanders Fields and American-born Moina Michael’s We Shall Keep the Faith, a response to McCrae.

But poppies can be about rest, peace – even oblivion.

Remember the scene in The Wizard of Oz, when the Wicked Witch curses the field of flowers?  She’s plotting to keep Dorothy and friends from ever reaching Emerald City.

Can’t you just hear the green-faced Margaret Hamilton cackling, “Poppies … poppies will put them to sleep.”

However, it’s not necessarily the first thing that comes to mind when someone mentions the flowers.

The baby name Poppy has been used in small numbers for well over a century. That’s not surprising – a great many floral names enjoyed at least some use. If we name our daughters Daisy, why not Poppy?

British actor Elsie Mackay took the stage name Poppy Wyndham. It’s not clear if she was influential enough to cause the name to rise in use. But she made her first film in 1919, the same year more than five girls received the name in the US for the first time.

Mackay went on to have a fascinating life. She became an interior decorator, working on opulent ocean liners. Later, she earned her pilot’s license. During an attempt to cross the Atlantic, her plane disappeared.

But she had dropped Poppy by then.

Sissy Spacek played a character named Poppy in 1972’s Prime Cut, a crime drama. It was controversial – for violence, among other things – at the time. It might be enough to explain the name’s modest rise.

But mostly, the baby name Poppy never caught on in the US. As of the year 2000, just 6 girls received the name.

By 2008, when the first version of the entry appeared, the number was just 73.

In the UK, though, the story was very different.

Another familiar figure is Harry Potter’s Poppy Pomfrey. While she appears throughout the series, the ever-busy Hogwarts school nurse is most often referred to as Madam Pomfrey.

In fact, the baby name Poppy entered the England & Wales Top 50 in 2002, and spent a few years in the Top Ten.

The name caught on earlier elsewhere in the English-speaking world, too.

Australian actor Poppy Montgomery gets some credit for the name’s success. She’s one of several botanically-named sisters, including Rosie, Daisy, Lily, and Marigold. Her daughter is Violet.

MOVE OVER, SCARLETT and RUBY

2016 gave us Anna Kendrick as the adorable, pink-haired Poppy at the center of Trolls. Sequels followed.

What do you think of the baby name Poppy? 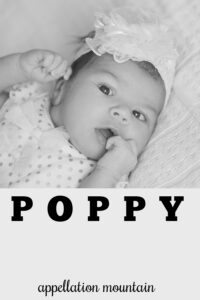