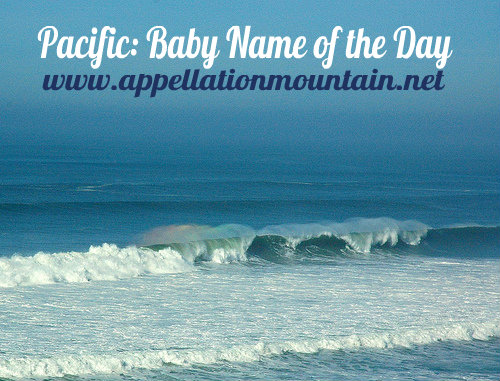 Nature names are all the rage, and place names are quite stylish, too.  Why not this oceanic appellation from the West Coast?

Thanks to Megan for suggesting Pacific as our Baby Name of the Day.

Pacific comes from the Latin pacificus – peaceful, calm.  Magellan sailed into the body of water in the sixteenth century, found it less stormy than the Atlantic, and gave it this name.

Technically, the explorer named it Mar Pacifico – peaceful sea in Portuguese.  It’s the largest of the Earth’s oceans, and the Mariana Trench in the north Pacific is the deepest point in the world.

Despite Magellan’s experience, the ocean is not necessarily tranquil – think volcanoes, tsunamis, tropical storms, and your usual weather-related upheaval.

In the US, the Pacific is associated with California.  It lends the name a certain laid back, West Coast charm.

Pacificus traces all the way back to Pax – peace, and a Jolie-Pitt kid.  That’s almost enough to give him given name status.

Except that he doesn’t need a modern stamp of approval.  There’s a history of use as a given name.

In the early thirteenth century, a poet became a monk in the monastery established by St. Francis of Assisi.  The poet was probably born William, but when he took religious orders he became Pacificus.

The name must have come into general use, at least within religious orders, because there’s a Saint Pacificus of San Severino in the late seventeenth and early eighteenth centuries.  The Italian missionary was canonized in 1839.  Pacifico may have been his birth name – or not.  In any case, it is occasionally heard as a given name in Italy, presumably inspired by the saint.

Pacifico is also heard in Spanish, as is the feminine form – Pacífica.  Former Philippine president Ferdinand Marcos had a younger brother named Pacifico.

In American usage, Pacific and company are less likely to be given names and more commonly found as products and places.  You could drive a Chrysler Pacifica until 2008.  And you can drink a Pacifico, a Mexican pilsner.  There’s a town near San Francisco named Pacifica, and an 81-foot tall statue called Pacifica welcomed visitors to the 1939-1940 Golden Gate International Exposition.

If Pacific sounds outlandish at first, on further reflection, it is easy to imagine him working:

Despite these points in his favor, Pacific is almost completely unused.  In no single year since 1880 have more than five boys or girls been given the name – that’s extraordinarily rare.  Still, a handful of men and women have answered to the name.  Many of them appear to have been born in Italy, but must have dropped the -o ending on arrival in their new country.

If you’re after a truly unusual name that can be easily spelled, Pacific meets both of those criteria.  He’s also rich with meaning – a virtue name of sorts for a modern boy.