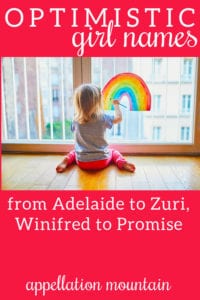 Optimistic girl names might be what everybody needs right now.

Their meanings range from sunny to joyful, noble to strong. They’re light and bright, loving and hopeful. Some signal spring; others, faith.

It’s a long list, ranging from traditional choices to modern ones. No matter your style, odds are that some of these optimistic girl names will appeal.

Aoife – The name of a warrior princess from Irish legend, Aoife means beauty. It’s often Anglicized as the similar-sounding Eva, another name on this list.

Calista – In Greek myth, Callisto and her son Arcas became Ursa Major and Ursa Minor. The name means “most beautiful,” but the association with a mama bear makes it fierce, too.

Calla – From the Greek kallos – beauty – just like Calista.

Beatrix – A mix of beatus and viatrix – voyager.

Brighton – An English – and New York – place name that shines.

Claire – From the Latin clarus – clear or bright.

Clara – Claire’s cousin, along with plenty of other names.

Lux – The word light, in Latin.

Orli – From the Hebrew phrase “light for me,” Orli fits right in with optimistic girl names.

Zahara – Several origins attach to Zahara, but in this case it’s the Hebrew meaning “to shine” that puts the name on our list of optimistic girl names.

Aurora – The Roman goddess of the dawn, Aurora signals the start of a new day.

Danica – The morning star in Slavic languages, Danica refers to Venus, which appears in the east just before sunrise.

Zora – Another Slavic name, Zora means dawn. It fits right in with Nora, Cora, and Aurora, too.

Constance – An old-school name that signals a steadfast heart.

Faith – An obvious virtue name choice for our times.

Vera – This one double dips. It comes from the Russian word for faith, but it sounds just like Latin verus – truth.

Amity – Another name in the key of Felicity and Clarity, Amity shares Amice’s roots.

Dora – Long before we automatically added “the Explorer” to Dora, this name came from the Greek doron – gift.

Dorothy – Another Dora name; the second syllable refers to God.

Isadora – Isadora is just like Dorothy, except it means “gift of Isis.”

Theodora – Yet another twist of Dorothy.

Daria – This name’s roots go all the way back to ancient Persia. It means “possessing goodness.”

Evangeline – This name might feel specifically Christian, but the meaning – good news – is not originally spiritual.

Blythe – An archaic English word, but with a modern meaning: happy.

Raya – An international name with multiple meanings, one of them is happy, via the Slavic rad.

Ciel, Ciela, Cielle, and Cielo – In French and Spanish, the word ciel or cielo means heaven and sky. Ciela and Cielle might make the word just a little more name-like.

Esperanza – Translate hope into other languages, and you’ll find some lovely optimistic girl names, including this Spanish name.

Hope – Possibly the most 2021 name ever, Hope is an enduring virtue.

Nadia – From a Slavic word for hope, Nadia also carries all the spirit of Olympic record-setter Nadia Comaneci.

Eve – The name of the first woman in the Old Testament, Eve literally means “to live.”

Zoe – Among the most familiar girl names meaning life, though Zoe is now also spelled Zoey.

Cara and Carina – Both names come from Italian and mean beloved.

Flora – Flowery Flora was the Roman goddess of spring.

Persephone – In Greek myth, Persephone’s annual return to the land of the living brought forth springtime.

Bernadette – A French feminine form of Bernard, meaning brave as a bear.

Leonie – One of several Leo names for girls, Leonie roars with all the strength of a lion.

Valerie – Another name from the same Latin root, Valerie is a long-time go-to for our daughters.

Nicola – Another Nicole name with a victorious meaning.

Victoria – Regal and triumphant, Victoria is also a Top 100 favorite in the US.

Irene – From the Greek goddess of peace.

Paloma – This name literally means dove, a symbol of peace.

Pax – The Latin word for peace, and once the Roman goddess of the same.

Mira – From mir, the Slavic word for peace.

Goldie – Something about gold names suggests peace and prosperity, suggesting a Golden Age.

Grace – Whether you’re spiritual or not, Grace suggests a better future.

Iris – The goddess of the rainbow, Iris serves as a powerful symbol of hope.

Nova – The Latin word for new, rich with possibilities and yes, optimism.

Rose – As in rose-colored glasses, everything is rosy, and coming up roses, too!

What would you add to this list of optimistic girl names? 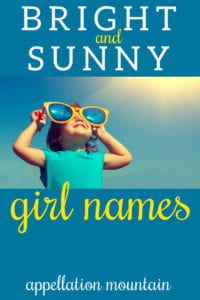 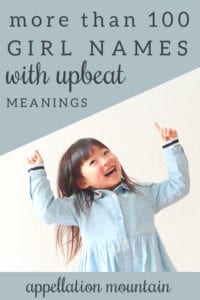