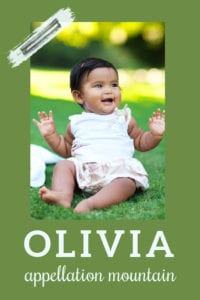 Thanks to Liv for suggesting our Baby Name of the Day.

In fact, he may have invented the baby name Olivia – though it was in sparing use by the time the play was written around 1601.

The Latin oliva means olive. There’s a series of Saint Olivas from ancient days. And, of course, Oliver was very much in use by Shakespeare’s time, and Olive was also heard.

Word play in Twelfth Night suggests the olive reference inspired the name’s choice. The phrase “hold the olive” refers to an olive branch, a traditional symbol of peace.

Shakespeare drew extensively on an earlier Italian comedy for inspiration, though it’s not clear if the character names come from that source.

What we do know is that the baby name Olivia never entirely went away.

For generations, Olivia served as the textbook definition of a normal name. Familiar, but not common.

Olivia de Havilland became a Hollywood star in the late 1930s, scooped up two Academy Awards for Best Actress in the 1940s, and yet didn’t inspire parents to choose her name.

Then came The Waltons, a television series about a wholesome, Depression-era family making the best of things in challenging times. It debuted in 1971 with a Christmas special. By the following September, it had become a television staple.

Olivia Walton was everything you’d expect in a matriarch – kind and compassionate, but also strict and hard-working.

Her name comes from Spencer’s Mountain, a novel by Earl Hamner Jr., loosely based on his childhood in rural Virginia. (Though Hamner’s mom was named Doris.)

Then came Olivia Newton-John. The Australia native won a talent contest, headed for the US, recorded the ballad “I Honestly Love You,” and scored her first hit.

That was 1974. In 1978, Newton-John starred as Sandy in Grease. Then came roller-skating extravaganza Xanadu. In the 1980s, she scored a massive smash hit with her album and hit single “Physical,” an anthem to the era’s aerobics craze.

Along the way, we met plenty of famous Olivias.

Fictional Olivias multiplied, too. In the sixth season, The Cosby Show gave us a super-cute Olivia Kendall, step-daughter to Denise Huxtable. The character was played by none other than Raven-Symoné. Given the show’s mega-popularity, it almost certainly increased use of the name.

From 2012 to 2018, Scandal gave us Olivia Pope, arguably the best known of the current batch. Unless you’re under twelve, in which case, Ian Falconer’s porcine Olivia, who debuted in her first book all the way back in 2000, might claim the title.

Given our affection for A names, Alivia’s success is no surprise. It might also appeal to parents eager to avoid OH-livia, in favor of a softer Ah-livia.

Add it up, and the baby name Olivia is powerfully popular. It’s a choice that feels literary and traditional, even though it’s really a twenty-first century favorite.

What do you think of the baby name Olivia? Do you hear it often?

First published on October 29, 2013, this post was revised substantially and re-published on November 28, 2020. 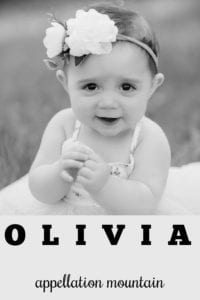