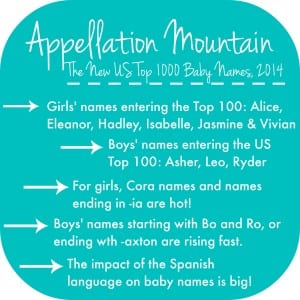 The new most popular baby names are out for the US! You can read all about the new US Top Ten lists here.

What stands out as interesting, new, and noteworthy?

Six Girls Names New to the US Top 100

Three Boys Names New to the US Top 100

Sounds & Clusters: The Age of Ia

The current girls’ Top Ten is dominated by names ending in -ia: Olivia, Sophia, and Mia. Also charting in the Top 100: Sofia, Amelia, Victoria, Aria, Lydia, and Julia. While Aaliyah doesn’t end in -ia, it has the same sound. The good news? There are dozens of great ends in -ia names for girls that aren’t in the Top 100, or even the Top 1000 – yet!

Check out the fastest rising names for boys, and oh, hello, Bo and Ro!

Sounds & Clusters: The Coras Have Arrived

I’ve been saying that the Coras are coming, and now they’re here!

There are still Cora names that remain rare. Corisande or Coralie, anyone?

The last few years have been dominated by names that rhyme with Aiden. But this year, Jayden left the US Top Ten, and many of the -aiden names are falling. Braidon, Braydon, Aydan, Aidan, Jaden, Aden, Aydin, Cayden, Jaiden, Braden, Kaden, Brayden, and Hayden all fell by ten or more places.

But creative coinages aren’t dead. The sounds are just changing. What’s the new -aiden? It could be -ylen, because Rylen and Kylen are both catching on. So are Kayson, Cayson, Brayson and Grayson.

I’m most intrigued by the ends-in-axton names. I’ve heard Braxton a few times, and I always mentally hear “Hicks” attached. Except Braxton ranked #121 in 2014, and has been climbing steadily since the 1980s. (I’d like to give credit to singer Toni Braxton, except her career took off in the 1990s.)

If I had to pick one thing that is dramatically reshaping how we name our children, it’s the impact of the Spanish language on baby names. According to the Pew Hispanic Center, 37 million Americans speak Spanish, up 233% since 1980.

Those are my initial thoughts looking at the US Top 1000 data for 2014. Anything leaping out at you?