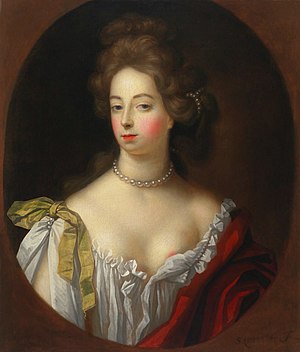 She’s an affectionate short form with a long history of use.

Thanks to Sarah for suggesting Nell as our Baby Name of the Day.

Nan and Nell both acquired their N in same fashion.  Once upon a time, it was common to refer to a loved as my or mine – or maybe mon, in French and Norman English.  Nan was a contraction of “my Ann.”  Nell could have come from Eleanor, Ellen, or maybe Helen – or any name that started with the el sound.

The first famous Nell made her name as an actress in Restoration England, and became the mistress of King Charles II.

Born in humble circumstances, she became a leading ladies in comedies, playing roles like Florimel in John Dryden’s The Maiden Queen.  This was no small feat.  Theater was new, and Nell Gwyn was likely illiterate, making learning her lines a challenge.  As her star rose, she attracted the eye of many a suitor.

The king wasn’t her first aristocratic lover; she wasn’t his first – or last – mistress.  Still, it makes for something of a Cinderella story.  It is often said that she started out selling oranges in the back of the theater, became one of the most admired actresses of her day, and ended as the mistress of the king, and mother of his children.

Unlike many royal mistresses, her reputation is mostly positive.  Samuel Pepys called her “pretty, witty Nell.” Her story has been retold many times, in an 1884 operetta, a 1911 film – the first of more than a dozen, and books galore.

Her given name was probably Eleanor, though little is known of her early life.  Other famous Nells include:

It is sometimes a surname, too, in which case it probably has different origins, related to Cornelius or maybe Neil.

The question is does Nell stand alone, or does she have to be short for something?  Tim Burton and Helena Bonham Carter gave the name to their daughter.  And short names for girls, from Mae to Sloane are very much in favor.  My inclination would be to put Helena or Penelope or maybe even Antonella on a child’s birth certificate, but I think she could stand on her own, too.