Zora recently returned to the US Top 1000, after over sixty years away.

Thanks to Laney for suggesting our Baby Name of the Day.

This name comes from a Slavic word meaning dawn. It’s used in the Balkans, as well as Bulgaria and the Czech Republic.

American parents embraced Dawn in the 1960s, for its hopeful, sunny vibe. Gilligan’s Island made Dawn Wells a star as Mary Ann Summers in the same decade. And Frank Valli and the Four Seasons released their upbeat, mournful plea Dawn in 1964. (Listen here. Dawn, go away, I’m no good for you …)

We still love names related to the night sky, like Luna and Stella. This one fits right in. It’s also another Emma name: two-syllables, ends-with-a, and feels complete without being too elaborate.

Plenty of variations can be found, too: Zorana and Zorina, Zarja and Zorica. But it’s the simplest form that seems most likely to appeal to parents in the US, and that’s thanks to another set of names.

Nora, Cora, and Aurora appear in the current US Top 100. Other spellings and more -ora names, like Norah and Kora, Amora and Elora, rank in the Top 1000.

It’s a sound that appeals to parents, and feels very current for a daughter today.

Factor in our appreciation of the letter Z, and it’s easy to see Zora as the same … but just different enough.

It’s also a name with impeccable literary roots, thanks to Zora Neale Hurston.

The Harlem Renaissance was underway when Zora Neale Hurston arrived in New York City in 1925. She was soon at the center of the movement, publishing the literary magazine Fire!! with Langston Hughes and several other writers we still read today.

In 1937, she penned Their Eyes Were Watching God, still considered one of the most important novels of the 20th century.

Beyond her literary achievements, Hurston studied anthropology at Barnard, collected and published African-American folk tales, and traveled to Haiti and Jamaica to study their traditions.

She was largely forgotten, only to be rediscovered in the 1970s, thanks to writer Alice Walker and others interested in the Harlem Renaissance.

Then it faded, and dwindled to almost nothing. Around a dozen girls received the name most years from the 1960s into the 1980s. Only in the 1990s did Zora slowly start to climb in use once more.

It wasn’t specific to Zora, of course. None of the -ora names fared well in those years.

But today they’re back. With an appealing meaning drawn from the natural world, a literary pedigree tied to the Harlem Renaissance, and that great first initial, Zora feels like a successor to Ava and Zoe, Aurora and Zara. If you’re after something simple, feminine, and just slightly different, but with lots of backstory, this could be the name for you. 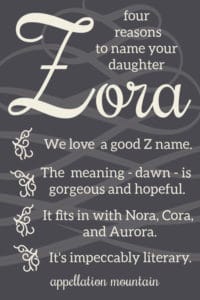