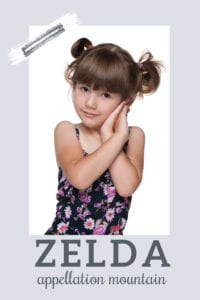 Some connect the baby name Zelda to Selig. Selig can also be Zelig. It means happy in Yiddish.

It might also be short for names ending with the right sounds. The most often mentioned is Griselda, one of those fantastic Germanic names completely out of favor in the twenty-first century. Petrarch and Chaucer mentioned the name, which is almost certainly why we still know it today. If the baby name Zelda comes from Griselda, then it carries a very different meaning: gray battle.

So you appreciate that fierceness, but the meaning that feels a little more universal is probably the first one – happy.

Long before Chaucer, other writers chose the name.

An 1866 novel by Jane Howard titled Zelda: A Tale of the Massachusetts Colony and Robert Edward Francillon’s Zelda’s Fortune in 1874 must have been fairly popular.

At least they were still familiar in the year 1900 to one new mother.

Chances are that the first Zelda that comes to mind is jazz age icon Zelda Fitzgerald, wife of celebrated author F. Scott Fitzgerald and a novelist in her own right.

Born in the year 1900, Zelda Sayre’s mother cited the stories as inspiration for her daughter’s unusual name.

Raised in Montgomery, Alabama, the daughter of a prominent Southern family, Zelda met F. Scott when he volunteered for the army in 1918. F. Scott was sent to Camp Sheridan, outside of Zelda’s hometown. They met and eventually married. The author freely admitted that several of his characters were modeled on his new bride; scholars later discovered that Zelda’s letters heavily influenced F. Scott’s work, too.

Dubbed “the first American flapper” by her husband, Zelda is wrapped up with our ideas about the era. And while the couple’s story ends on a low note – separated and burned out – we tend to remember them at their peak, living a fabulous life in the Roaring 20s. It informs how we hear the baby name Zelda today.

While Mrs. Sayre’s choice for her daughter might’ve been unusual, it wasn’t at all unique.

In fact, the baby name Zelda appears in the US Top 1000 way back in 1880 – the very first year for which data is available.

If once it was a Bohemian, Jazz Age darling, the baby name Zelda shifted. It still felt offbeat, but maybe in a different way.

After all, when Archie Comics introduced us to Sabrina the Teenage Witch, she lived with her aunts, Hilda and Zelda Spellman.

The name remained a reasonable choice for a witch as the series evolved, becoming a 1990s sitcom staple. The show gave us a scientist-witch, determined to see Sabrina use her powers for good.

She’s been re-imagined again for Netflix’s darker The Chilling Adventures of Sabrina, with Miranda Otto in the role.

Over the years, we’ve met a few other Zeldas.

Sitcom The Many Loves of Dobie Gillis introduced us to Zelda Gilroy in 1959. She was smart and accomplished, but – like Dobie and their friend Maynard – a little offbeat.

There’s actor Zelda Rubenstein, forever known as the diminutive psychic in the Poltergeist movies, and an Israeli poet known simply as Zelda.

You might also know that the late Robin Williams named his daughter Zelda Rae. That brings us to the next major use of the baby name Zelda … and inches us towards the name’s revival.

In 1986, Nintendo released the genre-busting Legend of Zelda video game. Players guided their hero, Link, through a series of underground dungeons. Link’s quest, of course, was to find and rescue Princess Zelda.

The game was a bestseller and has been reinvented over the years, becoming more and more sophisticated.

The character Zelda, too, has evolved. Instead of a damsel in distress, clad in a bubblegum pink ballgown, the newer iterations of Zelda are more independent. She adventures on her own, or by Link’s side, in more recent versions of the game.

But it never really left our imagination, thanks it large part to the legacy of Zelda Fitzgerald.

The name started to climb in use in the early 2000s.

In 2013, Therese Fowler published Z: A Novel of Zelda Fitzgerald. The bestseller became a 2017 Amazon series, starring Christina Ricci as the glamorous socialite.

All in all, Zelda feels glittering and glam, creative and vibrant. It’s different but not too different, wearable but not predictable.

If Odette and Tallulah are too different, but Stella and Piper too common, Zelda might fall exactly in the middle.

What do you think of the baby name Zelda? 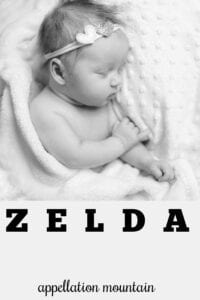