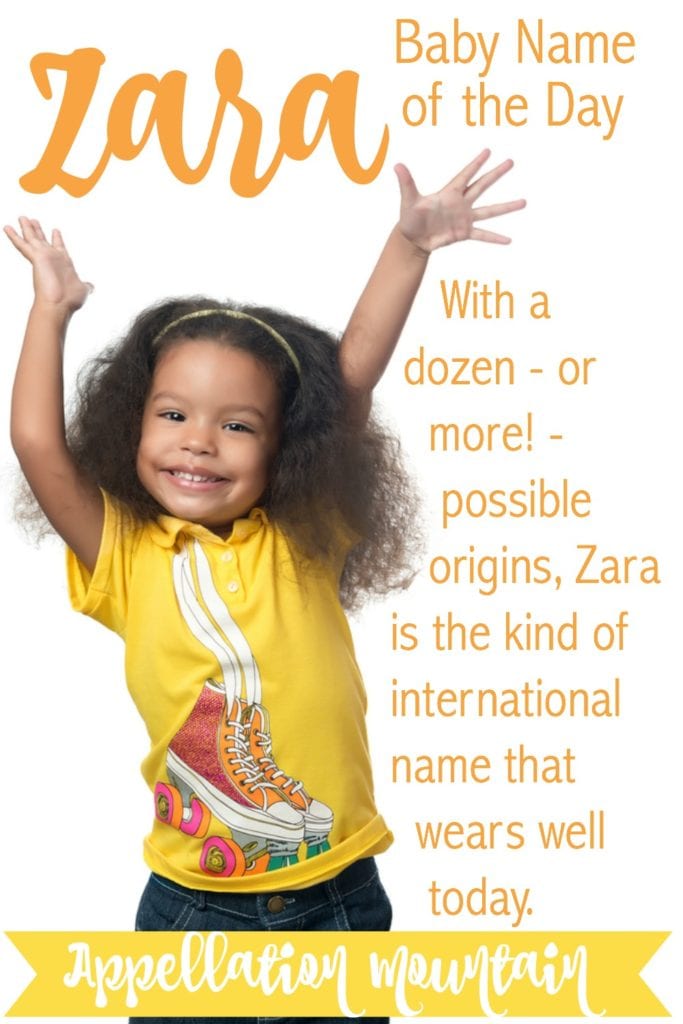 Zara is a rarity boosted by the royal family, and more recently, by our affection for the letter Z.

Zara Anne Elizabeth Tindall is the second oldest grandchild of the current Queen of England. She’s sixteenth in line to the throne, but she’s not a princess. Her mother, Princess Anne, declined titles for her children. She’s now Mrs. Mike Tindall, and the mother of Mia.

While the chances of her inheriting the throne are slim, graphic novel V for Vendetta imagined a queen by the name, ruling a dystopian version of the UK.

Where did Princess Anne find inspiration for her daughter’s unusual name? According to Hello! Magazine:  “The baby made a rather sudden and positive arrival,” recalled Princess Anne, “and my brother (Prince Charles) thought Zara (a Greek name meaning ‘bright as the dawn’) was an appropriate name.”

I’m not sure Charles is right about the name’s origins and meaning. Or maybe it’s more accurate to say that there are many possible sources for the name, including:

Other variations, like Zarina and Zaharina, have also been in use. Greta Garbo played a Budapest bar owner named Zara in 1932’s As You Desire Me, and Gilbert & Sullivan gave the name to a princess in their 1893 musical Utopia, Limited. William Congreve used it for the heroine of his 1697 tragedy, The Mourning Bride.

In other words: it’s a culture-spanning name that’s impossible to pin down, with many an appealing association. Take your pick!

Zara: On the Map

As for Spanish clothing retailer Zara, it’s said that founder Amancio Ortega planned to name his first store Zorba – as in Zorba the Greek. But their first store was set to open in La Coruña, Galicia, back in 1975 – right down the street from a bar called Zorba’s.

To avoid confusion, Ortega made a list minute change to Zara instead. There are now more than 2,000 stores on six continents.

Zara: By the Numbers

A handful of women have worn the name over the years. Actress Zara Cully played Mother Jefferson on television’s The Jeffersons in the 1970s.

If you’re after a name that’s straightforward, but feels nicely international, a name both modern and storied, this is one that should be on your list.

Would you consider Zara for a daughter?