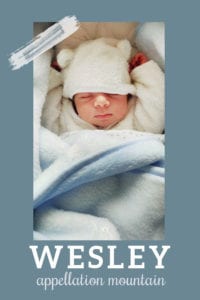 The baby name Wesley has hugged the edges of the most popular baby names for generations. It feels one-part English gentleman, one-part at home on the range.

The baby name Wesley has ranked in the US Top 200 – and sometimes higher – every year since the rankings began in 1880. It fits in nearly every era, sounding right with early 20th century picks like Stanley and Harvey; alongside Baby Boomers Larry and Jerry; and in the mix with 80s favorites like Cody, Corey, and Casey.

It entered into use as a given name to honor seventeenth century religious reformer John Wesley. A theologian by training – he studied at Oxford – Wesley drifted across various movements before starting his own. While he considered himself a member of the Church of England throughout his life, we now know his followers as Methodists.

The name entered common use in the 1800s as a means to honor his legacy.

One of the men named after the reformer? Future outlaw John Wesley Hardin.

Born in 1853, Hardin was a thoroughly despicable character, in trouble with the law from an early age and jailed for murder at the age of 23.

But in pop culture, Hardin became a romanticized hero.

He features in books, movies, and television.

Instead of sounding polished and gentlemanly, by the 1960s, the baby name Wesley felt a little rough and tumble.

After years of steadily rising and falling in the mid-100s, the baby name Wesley starting to rise in the 1970s.

One possible reason? Young actor Wesley Eure, known for roles in soap opera Days of Our Lives and children’s television series Land of the Lost, both airing simultaneously.

1973 novel The Princess Bride added a t to the name: Westley.

In 1987, it became a movie, starring Cary Elwes as Westley – and, of course, the Dread Pirate Roberts. It was only a modest success at the box office, but has since become a box office classic.

None of the other character names had an impact – Robin Wright played Princess Buttercup, a name that has never been given to even five girls in a single year. But Westley-with-a-t spiked in 1988, and probably helps explain our continuing love of the baby name Wesley.

Pop culture gave us more and more figures by the name.

Horror movie director extraordinaire Wes Craven made it big in the 1980s, beginning with A Nightmare on Elm Street. Eventually indie filmmaker Wes Anderson would make his mark.

Actor Wesley Snipes rocketed to stardom in 1991’s New Jack City. By 1998, he was playing a half-vampire hero in the Blade series.

And science fiction fans will think of Wesley Crusher, played by Wil Wheaton. The young crew member on Star Trek: The Next Generation is a child prodigy. His name likely pays homage to the original Star Trek creator Gene Roddenberry – middle name Wesley. The character debuted in 1987.

The baby name Wesley feels surprisingly versatile. It shares the softer sounds of Sebastian and Elijah, but pop culture gives us the outlaw and Wesley Snipes – figures that lend it quite a bit of muscle.

It fits right in with modern surname names like Mason and Hendrix, but Wes leans a little breezy and vintage, closer to Gus or even Max.

Factor in the name’s long history of steady – but not chart-topping – use, and the baby name Wesley feels like the kind of choice lots of parents seek. It’s a normal name, tough to pin to a specific generation and versatile enough to suit any personality.

What do you think of the baby name Wesley?

First published on September 28, 2008, this post was revised substantially and re-published on February 2, 2021. 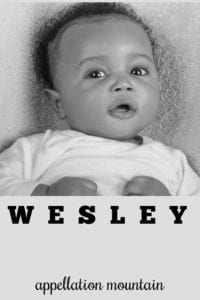