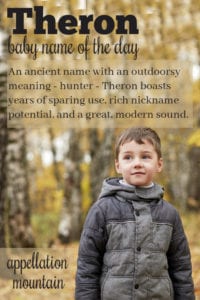 Theron sounds a little like classic Theo, and maybe a bit like a Game of Thrones character, too.

Theron means hunter in Greek, from the word therao – to hunt. It disappeared from the rankings right around the time parents fell hard for Hunter.

Ancient goddess Artemis was Potnia Theron – mistress of the hunt.

Orion, another ancient name associated with hunting, is on the rise. So why not this one?

An early bearer of the name takes us back to the 400s BC. Theron ruled Acragas in Sicily, and spent his reign waging war. Pindar mentions him in ode to Olympic champions; apparently, the tyrant was quite the chariot racer, too.

It remained in use as a given name, if only on the fringes, over the years. A handful of eighteenth and nineteenth century American notables answer to it, too.

An 1896 novel called The Damnation of Theron Ware seems obscure today, but remained known at least into the 1960s. Author Harold Frederic wrote the story of a Methodist pastor – that’s Ware – who questions his faith.

I note the 1960s because writer James Blish borrowed Theron Ware for the name of his dark magician in 1968’s Black Easter, a novel that imagines demons overrunning the Earth.

Theron: From Acragas to Johannesburg

For reasons difficult to unravel, Theron surfaces as a surname in South African. Actor Charlize put it on the map, but she’s not the only one.

It may be a place name; Thérond exists in France today. The village name comes from Occitan, and it may connect to the Latin word for height – torus.

Or not. It’s a little blurry.

My best guess is that the French name, heard in the Languedoc region, might have come to South Africa with the Huguenots, with a pit stop in the Netherlands. There’s at least one Frenchman with the surname who fits this description; he founded a South African winery.

But it also seems like the French surname might have evolved separately from the ancient Greek appellation.

Incidentally, Charlize and her countrymen pronounce it differently. It sounds more like thron, but with a rolled R.

There’s an uptick in the name’s use in the 1960s again. Credit a movie: 1960’s Home from the Hill, a family drama with George Hamilton wearing the name as the son stuck in the middle of many years of angst. Or maybe there’s another factor I’m overlooking.

A few decades later, it might have fit right in with all those two-syllable, ends with-n names for boys. And yet, just as Dylan and Austin and Colin were leaping up the charts, this name was headed the opposite direction.

Over the years, this has been the name of an obscure record label, a character in the World of Warcraft and a small animation studio. None of these are household names.

And how about Theoren? Ice hockey player Theoren Fleury, formerly of the NHL’s Calgary Flames and a perpetual maybe for the Hockey Hall of Fame, puts his name on the map.

Fleury also thinks the name – just maybe – to all of those other Theo- names, from Theodore to Theophilus. You might think of Thierry as the French form of Terrence, but it’s actually related to Theodore. So perhaps this one is, too.

And yet, it would wear well today. Like Theodore and Thatcher, it’s a Th- name. It fits right in with ancient choices that feel modern, and parents have yet to tire of those two-syllable, n-ending names.

Clay Cook of the Zac Brown Band named his son Theron Maine in August 2018. They’re calling him Teddie, but Theo works, too.

Overall, this makes for a great fits-in, stands-out choice for a son.

What do you think of Theron?

First published on September 18, 2008, this post was revised substantially and re-posted on December 5, 2018.