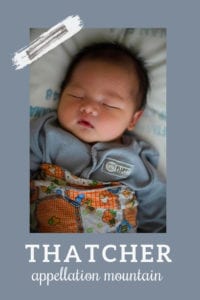 Thanks to Nick & Erin for requesting our Baby Name of the Day.

THE IRON LADY & A MEDIEVAL KNIGHT

Even before The Crown re-introduced Margaret Thatcher to the popular imagination, the UK’s first female prime minister was the most famous Thatcher of them all.

The Iron Lady dominated headlines in the 1980s. Depending on your politics, this could make it a hero name – or one to avoid at all costs. Then again, with the 80s farther and farther away, maybe it’s simply a historical fact.

The former PM isn’t the only Thatcher – not by a long stretch.

Another familiar figure is the valiant William Thatcher, played by Heath Ledger in 2001’s A Knight’s Tale. With the help of a ragtag-yet-loyal group of friends, including Geoffrey Chaucer, the peasant becomes a champion jouster and gets the girl.

UP ON THE ROOF

Ledger’s character also explains how surnames worked, once upon a time.

The humbly born Will earned his surname because his father earned a living patching roofs with straw – thatch. Like Mason, it’s the kind of occupation no one exactly does anymore, but survives as a common last name.

Thatch comes from the Old High German decchen, to cover. It evolved into thakan, then traveled to Middle English as thachen. Thatched roofs can be found throughout the world, and while you might think they’re flimsy, they can be maintained for hundreds of years – and have attracted attention once more as a sustainable material.

You’ll find the name on the map in many places, including California and Vermont.

For much of the twentieth century, Thatcher appeared as a sometimes-used rarity, possibly a family name promoted to the first spot.

Plus, the baby name Thatcher fit with so many trends. In 2013, the US Top 100 included Hunter, Tyler, Carter, and Parker. Many more -r ending surname names for boys were climbing in use.

Handsome and polished, Thatcher feels just slightly different. It’s a hard-working name, the kind of choice that feels capable. It’s easy to see why parents have made Thatcher a fast-rising surname pick.

What do you think of the baby name Thatcher? 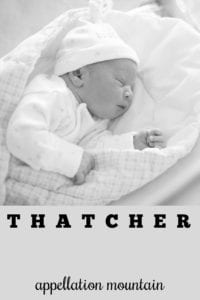