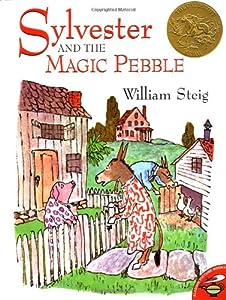 Sylvester and the Magic Pebble; Cover via Amazon

He’s been worn by popes and saints, actors and nobles. But did an animated cat send this gentle classic to fashion limbo?

Thanks to Photoquilty for suggesting Sylvester as Name of the Day.

Maybe Sylvester sounds a bit over the top, especially compared to James and John, Scott and Todd or even Joshua and Jacob. But in recent years, there’s a strong trend towards longer, softer boys’ names. The similarly constructed Alexander is a chart topper. Sebastian isn’t far behind. And some parents are starting to consider other ancient picks like Lysander and Leander.

Just like Sylvia, Sylvester means “of the forest,” from the Latin silva – woods. And just like the feminine version is sometimes spelled Silvia, Silvester is an accepted version.

In the US, Sylvester ranked in the Top 200 right through 1924. Some were probably named after three early popes, including the fourth-century Pope Sylvester I, now known as Saint Sylvester. His feast day is December 31, and some countries still refer to New Year’s Eve as St. Sylvester’s Day. Head to Brazil with your running shoes and you can ring in the New Year by competing in the Corrida Internacional de São Silvestre.

Other bearer of the name include:

While modern parents might blame Looney Tunes for the name’s demise, Sylvester was already falling out of fashion when the animated cat debuted in 1945’s Life With Feathers. Two years later, Tweety Bird uttered his famous line, “I tawt I taw a puddy tat.” The puddy tat got his name from the scientific name for wild cats – felis silvestris – though we all know that poor Sylvester is thoroughly domesticated.

Sylvester has fallen steadily over the years, finally exiting the Top 1000 in 1994. The name remains familiar, thanks to Sylvester Stallone. The actor best known for blockbuster franchises Rocky and Rambo was named after his Italian grandfather Silvestro. And while his nickname fits the actor well, it is hard to imagine calling your toddler Sly.

Besides the mountain, Sylvester appears on the map in France, Quebec and Switzerland.

Sylvester is quirky, but he’s been out of vogue for so many years that he just might be ready for revival by the most intrepid parents, dwelling in neighborhoods where Archibald already seems too common.