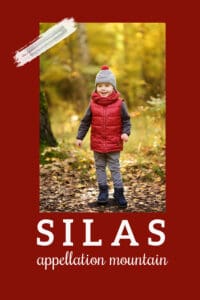 The baby name Silas has ancient roots and modern appeal.

Thanks to SG for suggesting our Baby Name of the Day.

Most sources agree that Silas starts with the Latin name Sylvanus or Silvanus, derived from silva, meaning forest, or the woods.

Sylvester, Silvia, Sylvain, and Sylvie all share the same origin.

Ancient author Virgil penned the Aenid between 29 and 19 BC. In it, he mentions an Etrsucan leader named Asilas.

The Hebrew name Saul was sometimes used as a form of Silas, but that seems to be a translation, not an origin.

The connection between the Latin word and Silas has been well-established for generations.

SILAS in the NEW TESTAMENT

The original Silas was an early Christian convert.

He accompanied the future Saint Paul on his missionary journeys throughout to Antioch, Syria, and Macedonia. Silas is considered a persuasive speaker and a respected leader.

In fact, he’s eventually considered a saint. At least two more saints Silvanus are recorded over the next few centuries.

Like many a neglected name, Silas was re-discovered during the Protestant Reformation, as parents sought a fresh source for baby names that expressed their personal convictions.

But the baby name Silas becomes literary thanks to George Eliot’s 1861 work, Silas Marner: The Weaver of Raveloe.

When the story opens, Marner is a weaver, facing a false accusation of stealing from his church. Marner loses nearly everything, and then he’s the victim of a robbery. But despite ill fortune, he slowly rebuilds his life, eventually taking in an orphaned child and raising her as his own.

If the Puritans revived the name in the 16th century or so, Silas would’ve been reasonably well-established by the name Coleridge borrowed it as a pseudonym and  Eliot gave it to the fictional character.

Mark Twain, Charles Dickens, and Nathaniel Hawthrone used the name for characters, though none are particularly well-known. American author William Dean Howells wrote The Rise of Silas Lapham in 1885; while Howells remains a significant figure from a literary perspective, the novel is not broadly familiar today.

It’s no surprise to hear Silas in the New World.

Silas Deane was an early American ambassador to France. (Though he’s overshadowed by fellow ambassador Benjamin Franklin.) His career ended in scandal; though he was posthumously cleared of any wrongdoing. The family home in Connecticut is now a historic landmark.

Other early Americans borrowed the name from the Bible, too.

Major General Silas Casey served in the Union Army during the Civil War.

Plenty of historical figures answer to the name. It still ranked in the US Top 200 into the 1890s.

All of this puts the boy’s name Silas on the list of familiar choices. But for years, the name languished in obscurity.

Sure, there was the novel. It inspired a BBC/Masterpiece Theater adaptation in the 1980s, starring Ben Kingsley in the title role. But that’s not exactly a pop culture phenomenon likely to inspire thousands of parents.

And then it returned, teetering on the edge of the rankings, through the 1980s.

Name popularity tends to run in a cycle. The so-called 100 Year Rule applies neatly to Silas.

It may simply be that Silas was out of use for so long that it started to feel fresh and new again.

Along the way, popular culture gave us:

The Vampire Diaries, in particular, has fueled the rise of several popular names. Duck Dynasty, too, may have contributed to the name’s rise.

Along the way, American writer Silas Dwane House and actor Silas Weir Mitchell were among the famous people to help raise the name’s profile.

In April 2015, Justin Timberlake and Jessica Biel gave the name to their new son, Silas Randall Timberlake. The proud father would later name his fourth studio album “Man of the Woods” in honor of his son. It’s also the name of a single, as well as his 2018 tour.

In interviews, Timberlake often explained that his son’s name inspired the album title. That makes Silas one of those baby boy names where the meaning is broadly known.

Even without any popular uses, Silas hits all the marks.

While it’s a stretch to call Silas international, it’s been popular in Denmark and the Netherlands. Congolese professional footballer Silas Katompa Mvumpa was Bundesliga Rookie of the Year in 2020-21.

A mix of a deeply ancient and storied name with so much modern style makes Silas absolutely irresistible.

It’s easy to imagine this name joining other borrowed-from-the-Bible favorites, like Joshua or Luke, near the top of the popularity charts.

What do you think of the baby name Silas? 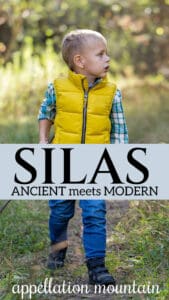 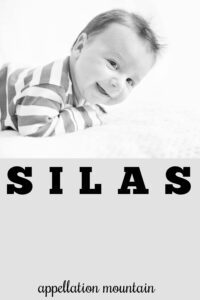