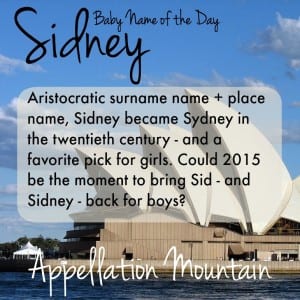 Today’s post was originally published on October 28, 2008. At the suggestion of Bertram Bergamot, it was substantially revised and reposted on April 20, 2015.

This surname name had gone girl towards the end of twentieth century. Is it time to bring it back for the boys?

Our Baby Name of the Day is Sidney.

Whether it’s spelled Sidney or Sydney, this name started out as a surname. There are two competing theories as to the name’s origins.

It could come from the Old English elements sid – wide – and eg – island, or possibly meadow.

Or maybe it’s a Norman contracted form of Saint Dennis. In French, Dennis sounds more like den EE and saint rhymes with can’t. Say santdenEE five times fast, and you’ll get to Sidney.

And, of course, it could also be both.

The Australian city gets its name from Thomas Townshend, Lord Sydney, who was instrumental in establishing the settlement.

There’s a story there: Townshend was descended from Algernon Sidney. Algernon was a politician, one who helped bring down King Charles I, but also opposed the rule of Oliver Cromwell. When Thomas was created a Baron in 1783, Sidney was his first choice. But would other descendants of Algernon object? The spelling Sydney came from a village near Townshend’s home in Kent. Similar, but not the same.

From the 1880s through the 1940s or so, it wouldn’t have been a surprise to meet someone with this name. This someone would probably have been a he, and he would’ve spelled it Sidney. By the 1950s, this name had left the US Top 200 and continued to fall.

Around the 1930s, Sydney – previously sometimes heard for men – picked up steam for girls.

Why? The Sydney Harbor Bridge opened in 1932. There had been a silent film star by the name a few decades prior. And maybe the popularity of Shirley had parents looking for something similar, but not the same.

There have always been a minority of women with this name, and if you think about Shirley and Cindy, as well as more recent favorites like Lindsay and Ashley, it’s not a huge leap to Sidney.

Some credit goes to Alias’ Sydney Bristow, spy extraordinaire on ABC from 2001 to 2006. But Neve Campbell first answered to Sidney in 1996’s Scream, and continued to outwit Ghostface into the new millennium.

Sidney: Back for Boys?

There’s never been a shortage of men by the name, including:

Now Jason Biggs has named his son Sid – just Sid. And if you’re a fan of mysteries, doubtless you’ll think of Anglican vicar and crime solver Sidney Chambers of television series Grantchester, based on the novels by James Runcie.

Both spellings of the name have faded for girls and boys alike in recent years. But if you look at the numbers, Sidney was given to 279 girls and 206 boys in 2013 – not a staggering difference.

Sid feels like a logical successor to Max and Gus, so maybe, just maybe, this nickname will help bring back Sidney for the boys.