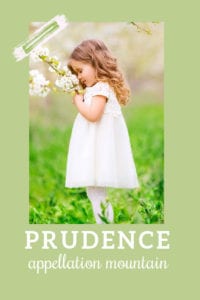 The baby name Prudence combines an unbeatable virtue with a trippy 60s soundtrack and a 90s hero, too.

Thanks to Katharine and Catherine for suggesting Today’s Name of the Day.

To be prudent means to exercise wisdom and good judgement.

Both the Greek philosophers and St. Thomas Aquinas counseled that practicing prudence would lead to the right course of action. It’s considered one of the four cardinal virtues first described by Plato, along with justice, fortitude, and temperance.

Today prudence suggests hesitancy. While it’s always been there – good choices require thought – in modern usage, we tend to over-emphasize prudence’s cautious nature. But there’s no mistaking the practical bent of this ideal.

The baby name Prudence sounds like a Puritan virtue choice, and indeed it was embraced by those intrepid reformers. (While no Mayflower passenger bore the name, it appears in use pretty early in the new colony.)

It wasn’t completely unknown prior to the late 1600s, through. There’s a Prudencie listed in the Dictionary of Medieval Names from European Sources circa 1400.

And while Prudentia is tough to find in the historical record, the Late Latin name Prudentius suggests that the feminine form may have seen some use, too.

The baby name Prudence may have some history, but it’s never been a star.

And yet, the name didn’t exactly head towards obscurity. There’s an uptick in the baby name Prudence’s use in the early 1970s. It really did teeter on the edge of extinction in the 1980s and 90s. But there’s a quiet, steady revival during the twenty-first century.

Beatles songs includes lots of names in the lyrics, including current Top 100 favorites Lucy and Eleanor.

“Dear Prudence” was included on the White Album in 1968. The Fab Four were already international mega-stars by then, following on the success of several albums, including Sgt. Pepper’s Lonely Hearts Club Band.

The song was written in India, where the quartet had retreated to take a meditation course. After all, it was the 1960s. While there, they met actor Mia Farrow – who’d become a major star herself in the 60s – as well as Mia’s sister, Prudence.

Prudence attended as a serious student. Perhaps too serious, the others thought, as she rushed from lectures back to her room to meditate.

John Lennon penned “Dear Prudence” in an attempt to entice Mia’s sister to join the group. The lyrics are literal – “won’t you come out to play?”

There’s something about the interplay between the lyrics and the baby name Prudence that feels predestined. Of course it’s Prudence who hesitates to join in the fun.

Like so many Beatles songs, it’s well-known many years later. It might explain some of the fictional Prudences from the last few decades.

Or maybe not. Writers from Evelyn Waugh to Enid Blyton used the name for characters in earlier in the twentieth century. 1962 romance Rome Adventure starred Hollywood heartthrob Troy Donahue as an American in Italy who falls in love with another American librarian looking for true love abroad – she’s a New England librarian named Prudence.

And sister signing duo Patience & Prudence recorded a series of modest hits from the 1950s into the mid-1960s.

But Prue Halliwell is better known that any of them.

The WB’s Charmed introduced us to three sisters, all witches by birth. The series debuted in 1998 and ran through 2006. It gets credit for launching Piper and boosting Phoebe, the names of the other two initial “Charmed Ones.”

Shannen Doherty played Prue. After much off-screen drama, her character was killed off after the third season, and a long-lost half-sister named Paige took her place.

Despite the series’ wild popularity, only the tiniest bit of magic rubbed off on the baby name Prudence. In 1998, 7 girls received the name. As of 2006? 31.

An animated Prudence plays a part in Disney’s Cinderella sequels, and Prudence was one of the many lyrically-named characters in 2007’s Across the Universe, a musical Beatles tribute film of sorts. (The hero was called Jude and they went with Lucy for the female lead.)

Since 1997, Slate’s advice column has been titled “Dear Prudence,” though Prudie has been staffed by at least four separate authors since then.

Jane Seymour starred in a 2011 made-for-TV movie titled Perfectly Prudence. That might explain a tiny jump in the name’s use that year.

And yet, the name’s comeback doesn’t seem to track to any single event.

Instead, it feels like the baby name Prudence feels so far out that it’s in, a name long neglected that it’s ready to be embraced by daring namers.

Prudence seems smart. It’s the perfect name for a no-nonsense district attorney or a pioneering scientist. With Eleanor in the Top 100 and similarly capable names like Maxine and Edith climbing, Prudence fits.

While the name remains rare, it mixes a lot of strength and backbone with a vintage, even whimsical, vibe that could appeal to parents seeking something completely different.

What do you think of the baby name Prudence? Can you imagine it making a comeback? 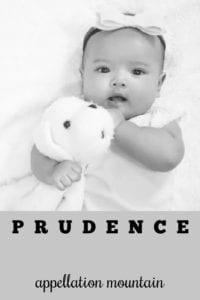