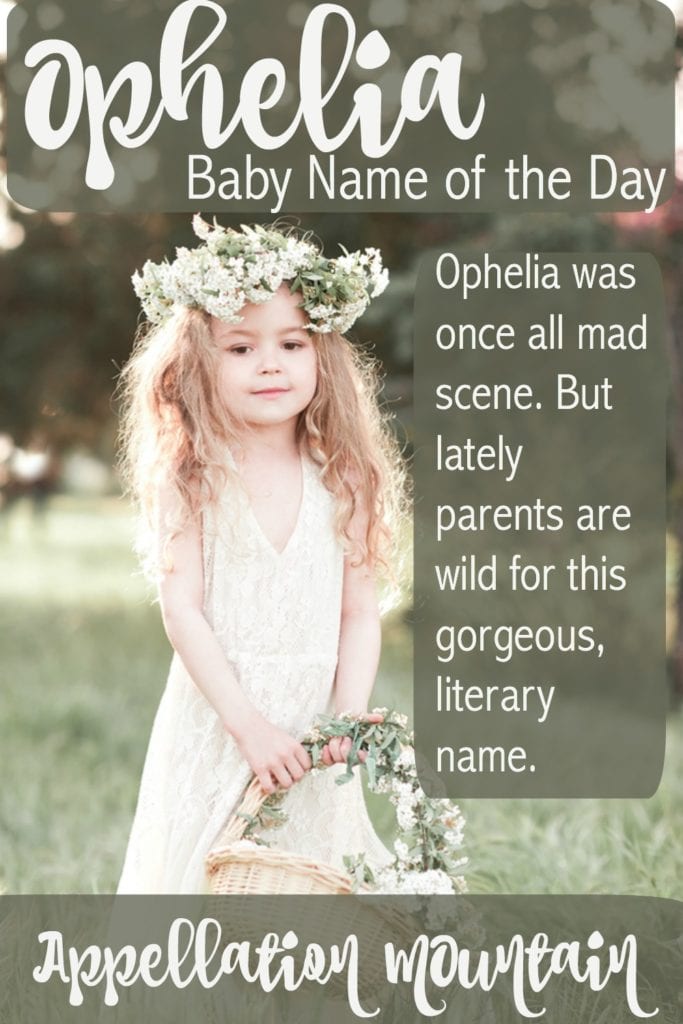 Ophelia has recently returned to the US Top 1000 after six decades’ absence.

Chances are you know something about William Shakespeare’s Hamlet, if only famous snippets like “To thine own self be true.”

You probably also know that Ophelia is the ill-fated girlfriend of the Prince of Denmark.

The name comes from the Greek ophelos – help or aid. Italian poet Jacopo Sannazaro used it for his 1480 poem Arcadia, with the spelling Ofelia. Sannazaro wrote about leaving the city for the countryside.

Sannazaro was widely read, and it is likely that Shakespeare borrowed the name from Arcadia.

After all, Hamlet’s Ophelia needed a lot of help. Her story is one of an innocent girl, who suffers mightily, goes mad, and ends the story in a watery grave.

Some suggest that Shakespeare based part of the story on an accidental drowning of another girl in the Avon River. (There are two candidates, though their names are Jane and Katherine.)

The tragic character has been painted by artists, referenced in novels, and ultimately became the symbol of teenaged girls’ struggles in Mary Pipher’s 1994 bestseller Reviving Ophelia: Saving the Selves of Adolescent Girls.

The name speaks volumes – about the hazards of love, the nature of young women, romantic ideals about death, and depictions of insanity.

All of that baggage might be why parents have avoided the name for decades.

By the 1960s, the name was considered outlandish and out-of-step. It was used for Morticia’s sister in The Addams Family comic strip and later television series. Marvel gave the name to a villain in 1969.

You’ll come across stories about a saint by the name, but if there’s any historical basis for her, I couldn’t find it.

This name has been slowly, steadily gaining in use throughout the twenty-first century.

Dave Grohl gave the name to his youngest daughter in 2014, and E!’s first original series, The Royals, features a character by the name.

But those uses aren’t why the name is catching on. Ophelia fits in beautifully with Olivia, Amelia, and many of the elaborate, ends with -lia names so in favor today.

So it’s no surprise that 276 girls were named Ophelia in 2015, enough to re-enter the US Top 1000 after decades of obscurity.

For now, the name remains rare enough that it’s still a great choice for a daughter. But the question is simply this: with so many similar names in the Top 100, how high will this name climb? After all, Jessica and Olivia are names from Shakespeare, too.

Do you think Ophelia will climb quickly? Would you consider this name for a daughter? Do you think the story from Hamlet is a problem?