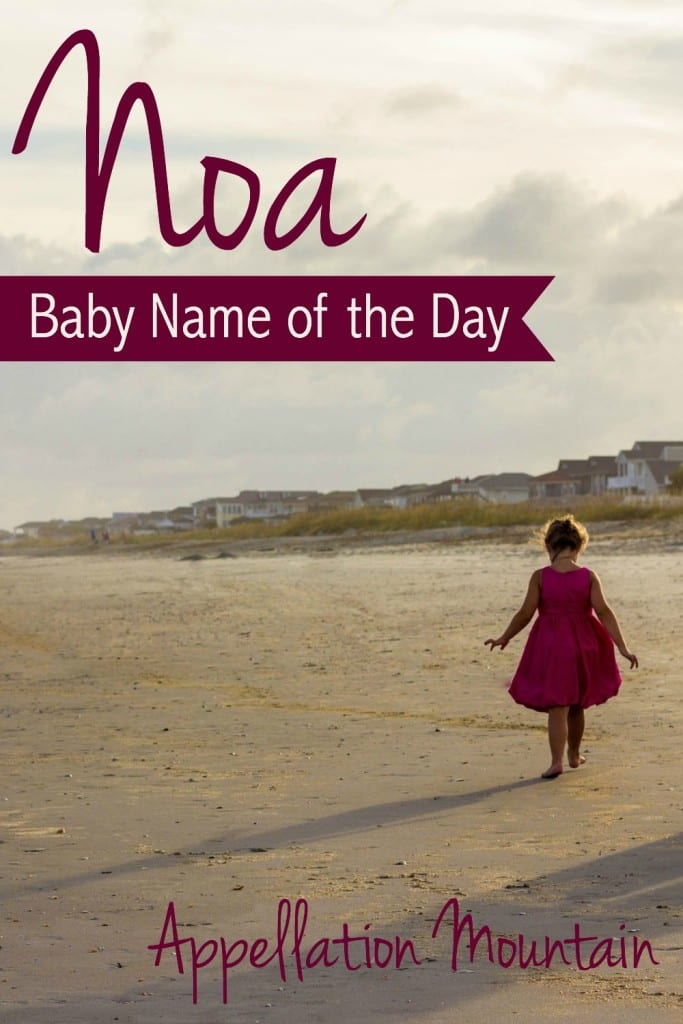 Noa is a mini name borrowed from the Bible, a great possibility for a daughter. But it’s been overshadowed by the very similar and oh-so-popular Noah.

Noah and his family gathered the animals two by two and weathered the Biblical deluge. Puritan parents loved the story, and used his name for their sons. Modern parents are fans, too, and Noah has bounded all the way up to the top spot in the US as of 2013.

But there’s another Noah in the Bible, and it’s a girl.

The masculine name, with the ‘h’ at the end, comes from a word meaning rest. Take away the ‘h’, and this is a feminine name, meaning movement.

In Hebrew, the ‘h’ is pronounced, making the names even more different. But in English, they sound exactly the same.

There’s a second bearer of the name in the Old Testament – a daughter of Zelophehad. She and her sisters inherited Zelophehad’s property despite custom dictating that women could not inherit. It’s a modern spin on an ancient name.

If you’re planning on traveling the globe, this name is nicely portable. Besides Hebrew roots, this name is known in Japan, where it means “my love.” I’ve also seen it listed as Arabic and Hawaiian, though I’m not confident of those last two.

Nonetheless, the name is big in Europe: in Spain and Belgium. It’s held the #1 spot in the Netherlands, and has also been the most popular name for girls in Israel.

Characters by the name have appeared in Japanese animated series Fullmetal Alchemist, and the extended Star Wars universe – though the Star Wars character is male. The most famous women are almost all Israeli – there’s a singer who has represented Israel in the EuroVision Song Contest, as well as actress Noa Tishby, who has guest starred on many a prime time drama in the US.

In the US, Noa is at the intersection of two trends. It feels like a borrowed-from-the-boys name, a choice that would fit right in with unisex style names like Harper and Quinn. But it’s clearly feminine, and fits with short, ends-in-a names for girls, like the chart-topping Mia and Ava.

The numbers reflect all of this potential. The name started to rise in the late 1990s. And in 2014, Noa appeared in the US Top 1000 for the first time.

That’s still just 284 girls with the name, though – many fewer than the more than 15,500 named Ava or the nearly 13,500 called Mia. It makes Noa an approachable name with an interesting story, and just enough use to be familiar – if only you can explain that it isn’t spelled with an h.

Do you think Noa would be too confusing with so many boys called Noah?

This post was originally published on September 20, 2008. It was substantially revised and re-posted on March 24, 2016.