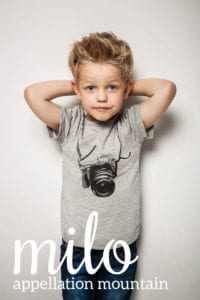 Is Milo the next Mason?

Thanks to Silent One for suggesting our Baby Name of the Day.

For years, we knew Miles as a Pilgrim, complete with over-sized shoe buckles and a serious face.

That’s because Myles Standish sailed on the Mayflower, a military officer rather than a true believer. He led the colonists as a commander for most of his life, and also served in administrative roles.

John Legend and Chrissy Teigen gave the name to their son in 2018, the same year it finally reached the US Top 100.

Miles and Milo almost certainly come from the same Germanic roots. Miles is simply the English form. The -o ending original may have derived from the Slavic milu – gracious, dear.

Or not. There’s an ancient Greek wrestler by the name, way back five centuries BC. And then an eighth century bishop of Reims answered to the name. It dots the historical record over the centuries, raising the possibility that there’s more than one origin and meaning.

But today, it reads like Miles-with-an-o. And this is a good age for o-ending boy names. Leo has ranked in the US Top 100 for five years and counting.  Plenty of o-enders are on the rise. And, in general, we’re bullish on vowel-ending boy names, from Noah, Luca, and Ezra to Eli, Kai, and Beau.

This names carries a little bit of an edge.

In 1982, punk bank Descendents released Milo Goes to College. It proved broadly influential – even if it wasn’t exactly a radio hit. The drawing on the album cover was based on Descendants frontman Milo Auckerman who was, in fact, leaving the band to return to school. (Auckerman eventually earned a PhD in biochemistry.)

Plenty of other associations reinforced the name’s quirky-edgy outsider status, including a mix of heroes and villains.

All of this means a generation of future parents grew up with the name – either on vinyl or associated with a cute kitten. Possibly both.

He was one of Rory’s love interests, the brooding Jess, in Gilmore Girls. He graduated to nurse-turned-hero Peter in Heroes. He’s been a fan favorite all along, but 2016’s This is Us made him a star. The fourth season of the NBC drama is currently underway.

A handful of celebrity parents, including Liv Tyler, have chosen the name. It returned to the US Top 1000 in 2001, after many years of obscurity.

It’s popular in France and Belgium, Sweden and Finland, and elsewhere in the English-speaking world, too. Not Australia, though, where it’s the name of an energy drink.

But in the US, it’s reached #178 as of 2018. It’s gained in use consistently over two decades, suggesting that this might be one of the new boy names to watch in the coming decade.

First published December 15, 2009, this post was revised substantially and re-published on January 22, 2020.