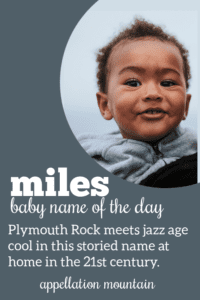 Miles feels like an antique revival, but it’s actually more popular today than ever before.

Debate surrounds this name’s meaning and origin. My best guess? It’s an all-of-the-above scenario, with more than one backstory behind the name.

The Germanic element mil means generous or good. It’s usually connected to Milo, which is close but maybe not quite the same name.

Then there’s the Slavic milu – gracious.

And in Latin, miles means soldier. Way back in the year 200 BC, the Roman writer Plautus authored Miles Gloriosus, a comedy about a swaggering soldier – who actually answers to Pyrgopolynices.

Some combination of the above surely explain the name, which the Normans imported to England. It’s also possible that it evolved from Mihel, sometimes listed as an old French form of Michael – but that seems to be pretty rare.

To complicate things even further, Myles appears in Greek myth. He’s the son of King Lelex, from whom he inherits the kingdom of Laconia. The beautiful maiden Sparta was his granddaughter, and the ancient city named in her honor.

It appears this name was lost long before English speakers considered any similar choice for their sons.

We know the name appeared in use by the sixteenth century, thanks to two men.

Miles Coverdale translated the Bible to English in the 1530s, eventually becoming an early Puritan thought leader. Captain Myles Standish led the Pilgrims to settle at Plymouth and served as an influential leader of the colony, though he himself was not a believer.

What we know about Standish is obscured by Henry Wadsworth Longfellow’s poem The Courtship of Miles Standish. It transformed him into something of a folk hero, and romanticized the early Pilgrims in ways that still influence our thinking today.

The poem was written in 1858, and was quite popular. Since US name data begins in 1880, it’s difficult to gauge Longfellow’s impact.

A collection of characters answered to the name over the years:

It gained steadily during the 1980s and 90s, becoming nearly mainstream by the turn of the twenty-first century.

Maybe the biggest influence over how we hear the name: Miles Dewey Davis III, a jazz legend with a place in the Rock and Roll Hall of Fame.

His career spanned five decades. Davis innovated and alienated; opened the art form to new listeners and changed the way we experience music. 1959’s Kind of Blue remains the top selling jazz album of all time.

His style and artistic prowess left the name forever changed. It reads cool, edgy, and part of American history in a very different way than Captain Standish.

While no one suggests that the name shares origins with the Old English mil – the source of our word mile – the shared sound lends Miles some of its adventurous spirit.  At least one marathoner has chosen the name as a nod to running.

Celebrities have embraced it for their children, including John Legend and Chrissy Teigen. Characters from 2004 movie Sideways and long-running television favorite Lost answer to the name. So does Miles Morales, the newest hero to wear the alias Spider-Man in the comic books, some television series, and, of course, 2018’s Spider-Man: Into the Spider-Verse.

That tracks with the name’s rise in use. For several years, it’s hovered just outside of the current US Top 100.

It sounds smart and stylish, rooted in history but at home in the world today. No surprise this name is going places.

Would you consider Miles for a son? 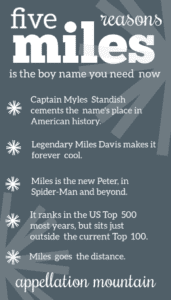