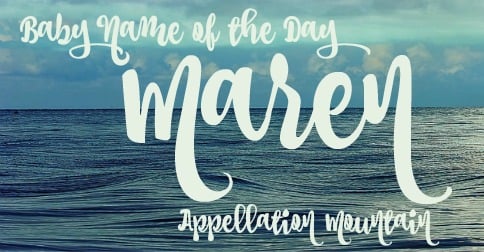 This post was originally published on July 14, 2009. It was substantially revised and re-posted on December 21, 2015.

It’s a tailored choice that brings to mind the sea.

Thanks to Photoquilty for suggesting Maren as our Baby Name of the Day.

For every Arabella, there’s a Gertrude.

Maren occupies the middle ground – feminine, but frills-free. It’s not quite as gender neutral as Sutton, but it’s also not as obviously meant for a girl as Lucinda.

This makes it a great compromise name for parents torn between Alena and Sloane.

There are plenty of possible sources for the name:

Spell this name with an ‘i’ and the list of origins and meanings grows even longer:

All of this makes the name gender neutral, and also suggests multiple pronunciations. I tend to rhyme Maren with Karen, but Marin County sounds more like Corinne.

Maren: By the Numbers 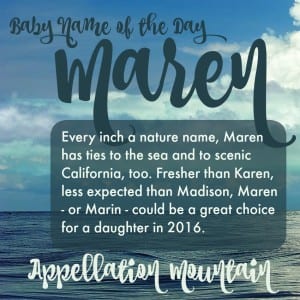 The ‘e’ spelling is slightly more common in the US.

The original Battlestar Galactica cast included an actress named Maren Jensen, and the name briefly charted in the US Top 1000 between 1979 and 1982.

Marin was given to just 162 girls last year, but it was actually even more popular than the ‘e’ spelling. One possible reason? 2003’s Something’s Gotta Give, featuring Amanda Peet as Marin. The name charted in the US Top 1000 from 2004 through 2008, peaking with 324 newborn Marins in 2007.

All of this makes Maren a choice that’s both under-the-radar and on trend. If Karen can become a Top Ten favorite in the 1950s and 60s, there’s no reason Maren couldn’t follow the same path.

If your favorites range from Harper to Lily to Claire, this unexpected possibility bridges them all. It could work beautifully in the first or the middle spot.

What do you think of Maren? Do you prefer the ‘e’ or the ‘i’ spelling?