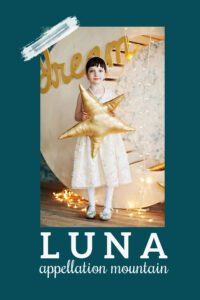 Long before JK Rowling imagined Hogwarts, ancient Romans considered Luna the name of the Roman goddess of the moon. She’s often shown driving a chariot through the night sky.

Sometimes other goddesses, like Diana and Juno. were called Luna; at other times it’s clear that Luna was separate.

And our words lunar and lunacy come from the same origins. As goddess names go, it’s one of the most easily understood.

That’s especially true, as Luna is simply the Spanish word for moon, too.

In Greek mythology, the goddess is called Selene.

Some names from Greek and Roman mythology were seldom heard in American English until recent years.

That’s not the case with the baby name Luna.

In fact, it qualifies as a vintage revival. Back in the nineteenth and early twentieth centuries, Luna regularly ranked in the US Top 1000, charting as recently as 1921.

Entrepreneurs Elmer Dundy and Frederic Thompson opened the amusement park. Some say the name was borrowed from Dundy’s sister, or possibly it was inspired by one of their flagship rides, A Trip to the Moon. Dozens of other parks borrowed the name, from Melbourne to Moscow, and across the US, too.

By the 1980s, the baby name Luna had become quite rare as a girl’s name, given to just a handful of children each year.

In 1997, the world met Harry Potter. The orphaned boy wizard with a tragic backstory and a heavy destiny began his studies at Hogwarts School of Witchcraft and Wizardry, and the world went with him.

In 2003, the fifth book in the series, The Order of the Phoenix, introduced us to a fellow student, Luna Lovegood.

At first, she more than earns her nickname – Looney – thanks to a love of conspiracy theories and unconventional accessories. But she ends up quite heroic by the series’ end.

The name re-entered the US Top 1000 the same year The Order of the Phoenix was published.

When the movie adaptation followed in 2007, the baby name Luna reached the Top 500.

Around the same time, a different supernatural series was about to put the spotlight on Luna.

It includes weres and shapeshifters. One of them? Luna Garza. She’s a skinwalker – someone who can shapeshift into any animal or person. She’s introduced in a 2002 novel, and debuts on the television series during the fourth season, in 2011.

While Luna wasn’t a major character, True Blood was a big hit. 2011 led to a big jump in the use of Luna, suggesting that the one-two punch of Lovegood and Garza deserves credit for putting Luna on the list of fast-rising baby girl names.

Celebrities have given this name to their daughters. Uma Thurman and Arpad Busson welcomed Rosalind Arusha Arkadina Altalune Florence in 2012. They shorten her many-syllables name to Luna.

Penelope Cruz and Javier Bardem gave the name to their daughter in 2013. Chrissy Teigen and John Legend also chose the name in 2016.

None of the high profile birth announcements really fueled the name’s rise, though.

While variations exist, like the French Lunette and Italian Lunetta, none are particularly well-used in the US.

Fans of My Little Pony might think of Princess Luna, the villain from My Little Pony: Friendship is Magic. (Or at least she’s the villain until they all make up and live happily ever after.) The series ran from 2010 through 2019.

And actor Luna Blaise has appeared in Manifest and Fresh Off the Boat.

The baby name Luna fits into so many trends.

It’s a nature name, a little more modern than Hazel, but still less novel than River.

Mythological names, like Orion, Aurora, and Penelope, continue to gain in use.

While it’s not always obvious, a name’s potential to cross between English and Spanish is important. The top boys’ name, Liam, is equally appealing in both languages. So is Luna.

Lou- names, from Luca to Lucia to Louis, are climbing in the popularity charts, too.

It fits with the Latin Stella, meaning star.

And to bring it back to where we started: a name with ties to the nature and myth? That’s a textbook Wizarding World name – even without Miss Lovegood.

An earlier version of this post read, ” … this celestial appellation is a stylish choice for parents in 2014. The only question is how popular (Luna) will become.”

The answer seems to be more popular than anyone might’ve guessed just a few short years ago.

All these years later, the answer seems to be very popular, indeed. And yet, this night sky name could rise even more. That means the question still remains: just how high will Luna go?

What do you think of the baby name Luna? 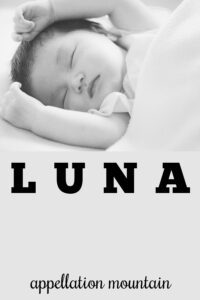