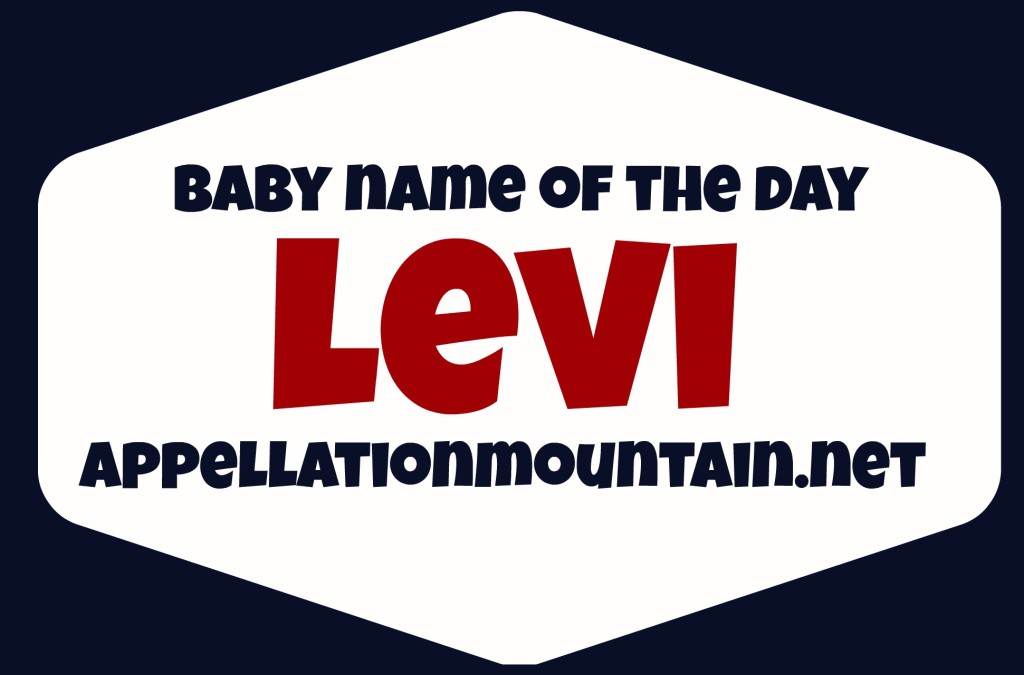 Editor’s note: This post was originally published on July 9, 2008.  It was substantially revised and reposted on March 31, 2014.

Thanks to Another for suggesting Levi as our Baby Name of the Day.

Levi was Jacob and Leah’s third son, the Old Testament patriarch who gave his name to the Levites, one of the twelve tribes of Israel. This makes it an ancient name, indeed, and one reflected in surnames, from Levy to Levine to Loewe.

Despite the name’s history, he was rare in Europe until the Protestant Reformation when Christian parents ditched saints’ names for Old Testament choices.  There’s no Saint Levi – though the apostle Matthew was sometimes referred to by this name.

He’s got an interesting meaning, too – though Leah’s reason for choosing the name is bittersweet.  Using the King James version of the Bible, in Genesis 29:34: “And she conceived again, and bare a son; and said, Now this time will my husband be joined unto me, because I have born him three sons: therefore was his name called Levi.”  The Hebrew lewi means joined or attached.

Levi had a good run in the nineteenth century.  He ranked #118 in 1880, and plenty of notables wore his name: Levi Coffin was a Quaker abolitionist involved in the Underground Railroad.  Levi Leiter founded Marshall Field & Company in Chicago.

Then there are the blue jeans.

Levi Strauss was born to a Jewish family in Germany in 1829.  Most of the Strauss kids came to America and went into business, selling dry goods from the family’s San Francisco branch.  It was the age of the California Gold Rush, and Strauss sold canvas tents and work pants to the prospectors.  Some of them found gold, but what’s certain is that once Strauss and Latvian-born tailor Jacob Davis went into business selling riveted denim pants, the family’s fortune was secured.

Jeans have slowly become everyday wear for many, but the name had faded by the 1960s.  It took a few more decades for the tide to turn.  The 1980s saw the rise of Joshua and Jacob, followed by Noah and Isaac and other Biblical picks in the 90s.

As it happens, Denim – nearly unheard of as a given name until recent years – followed a similar trajectory.  Obscure in the 1970s and 80s, he has climbed in recent years, too, with 72 boys and 36 girls receiving the name in 2012.

And why  not?  Levi combines the best of so many names.  He’s short and complete, with that great Scrabble letter ‘v’ and a modern sound.  His Biblical ties make Levi feel traditional and grounded.  But those blue jeans are casual, friendly, approachable.  There’s something rugged about this name, but not he’s far less of a cowboy than Wyatt or Jace.

That’s the only possible problem: with so many of us appreciating Levi’s many charms, chances are that you already know one – or more!