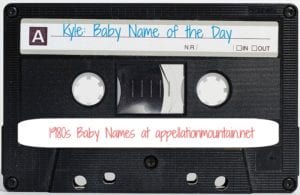 Kai might be more stylish for boys born in 2014, but this name remains more popular.

Thanks to Skye for suggesting our Baby Name of the Day: Kyle.

Parents tend to play it safe when naming their sons.  The enduring classics – think William and Joseph – tend to be used and re-used.  And yet there’s a growing category of modern classics, names that would have been rare in the nineteenth century, but have become solidly established in recent decades.

File Kyle in that category.

During the nineteenth century, only a few boys received the name every year.  But he gained steam throughout the twentieth century, reaching the Top 100 in 1974 and staying there through 2009.

The meaning is usually given as channel or strait, from the Gaelic caol.  The term is still used for bodies of water in Scotland today.  It’s sometimes a surname, derived from the place.

There’s also Scotland’s Kyle District, complete with the ruins of Kyle Castle. The district was folded into another county in 1889. Places called Kyle remain on the map in the US, Canada and Australia.

The region suggests yet another possible meaning for Kyle: legend says it was named after Old King Cole. Before the merry old soul inspired his nursery rhyme, he was a semi-legendary King of the Britons. Cole traces back to the Roman Coelius or perhaps Caelestis. The latter survived as Celestine and means heavenly.

Today Kyle is quite down to earth, thanks to famous Kyles like:

As for the surname, there’s:

Kyle may have recently left the Top 100, but the Ky sound remains current.  There’s Kai, as well as Kyle-Tyler smoosh Kyler.  On the girls’ side, Kylie – pick your spelling – has had a good run, along with Kyla.  Sky, Skye, Skylar, and Skyler have all seen use for boys and girls.

Maybe that’s one of his drawbacks – Kyle has been around long enough that he’s in dad-name territory, and with all of those other Ky- names, he doesn’t feel very original.

But if you can overlook the possibility that your son might sometimes share a classroom with Skyleah or Kyson, the name offers up an appealing compromise. While his history is undeniable, he’s very much a modern name. His sister could be the equally sensible Melissa or Rachel as easily as the intriguing Scottish Elspeth or Isobel.

While Kyle is no longer exciting and new, that could be his strongest asset.

Do you think Kyle is a modern classic, or a fading trend?  Are there other K names for boys that you prefer?