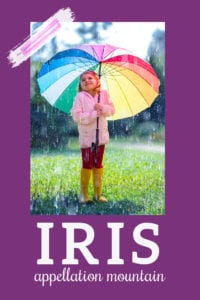 The baby name Iris traveled from ancient myth to the garden by way of a rainbow.

Long before the baby name Iris bloomed among the garden of botanical girl names, it belonged to a goddess.

Iris means rainbow in Greek, and in ancient myth, the name belonged to a messenger. She traveled via rainbow, bridges that connected the otherworldly realms to the land of mere mortals. Homer and Euripides mention her, and artists depict Iris as a young woman with wings.

In Spanish, arco iris means rainbow today. And the English word iridescence – familiar to any child who has ever marveled at the shiny surface of a soap bubble – comes from the same root.

And yet, a rainbow isn’t necessarily the first image that comes to mind.

For many, the baby name Iris brings to mind a blue-violet flower.

Vincent van Gogh painted the world-famous Irises in 1889. (Though actually, he painted several works featuring the flowers late in his life.)

While the flowers come in many colors, the blue-violet hue is cemented in our minds – at least in part thanks to the artist. We’ve only used it as a color name since the 1910s.

In fact, it’s possible that the flower is called an iris because it comes in so many shades of the rainbow.

You might also think of our eyes. The iris refers to the colored part, which again, varies from person to person. Still, the association with our eyes somehow makes the baby name Iris a little more than a simple nature name.

With names like Isabella and Isla, Lily and Violet in the US Top 100, perhaps the baby name Iris is poised to join them?

One more factor explains the rise of Iris.

In 1998, Nicolas Cage and Meg Ryan starred in a romance with a supernatural side. It’s called City of Angels, and it was a modest success.

But the title song? The Goo Goo Dolls recorded “Iris” for the movie. But Meg Ryan’s character wasn’t Iris; her name was Maggie. Goo Goo Dolls lead singer Johnny Rzeznik borrowed the name from country singer Iris DeMent, after seeing her name in a magazine.

But the numbers suggest that the song – which has remained in rotation ever since the movie’s release – inspired parents. In 1997, the baby name Iris ranked #506. It’s climbed steadily nearly every year since.

For every Daisy, there’s an Iris.

Both are florals, and undeniably pretty. But while Daisy seems fresh and innocent, Iris conveys strength and intelligence.

Or maybe it’s due to figures like writer and philosopher Iris Murdoch. (Kate Winslet played her in a 2001 biopic.)

And perhaps the soaring lyrics to the hit song layers on some depth. Maybe.

Overall, the baby name Iris balances so many qualities – it’s vintage, but modern. Familiar, but not too common. All of the associations feel pleasing and positive. And it’s the kind of name that feels just right for a daughter, but every bit as appropriate for a woman of accomplishment.

Would you consider the baby name Iris for a daughter?