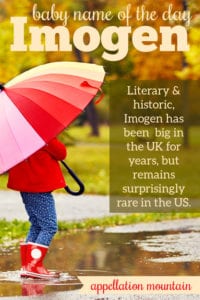 We whispered Imogen down the alley, a name transformed by history and Shakespeare, too.

The name likely comes from the Gaelic word inghean – maiden. First spelled Innogen – with a double ‘n’ rather than an ‘m’ – it may have changed accidentally.

Legend tells of King Cunobelinus, a ruler of pre-Roman Britain, and his daughter, Innogen. She wants to marry for love, but it’s necessary that she marry to secure the kingdom. Heartache follows, and lots of skullduggery, but ultimately all ends well.

The Bard borrowed the figures for his play, Cymbeline, first performed around 1611.

It’s thought that Shakespeare used the Innogen spelling for the British princess. A typo transformed the name, as his play was copied and re-copied. Not only was the ‘nn’ spelling found in source documents used by the Bard, but some accounts confirm that early performances gave the character’s name as Innogen.

The character is admirable. She remains loyal to her estranged love, even when she suffers mightily. But Cymbeline is not among the most favored or widely-performed plays today, so fewer people recognize the character than, say, Beatrice or Juliet.

Imogen: US versus UK

Between British history and the name’s literary roots, parents have plenty of ways to discover this name.

In the UK, Imogen routinely ranks in the Top 100, and has for nearly two decades. It’s a little like Natalie or Samantha in the US – we’re just used to hearing it as a given name.

Add an ‘e’ to the end, and this name actually had a good run in the US. Imogene peaked in the 1920s, reaching the Top 200 for a handful of years.

So while the -jen ending has never caught on, the -jean sound had a good run.

There have been -jeans in:

The late Imogene Coca’s comedy career spanned many years. You might know her as Aunt Edna in the original 1983 National Lampoon’s Vacation.

But in recent years, Imogen has seen a modest uptick. Julia Stiles wore the name in 2000’s Down to You. Real-world Imogens, like singer Heap and actor Poots, raise the name’s profile, too.

Imogen: By the Numbers

It’s nickname-rich, with short forms like Immy, Gen, Gigi, and Moe all possible. But no nickname is required, either.

If you like your girl names vaguely British, steeped in history, and relatively obscure? Imogen is one to consider.