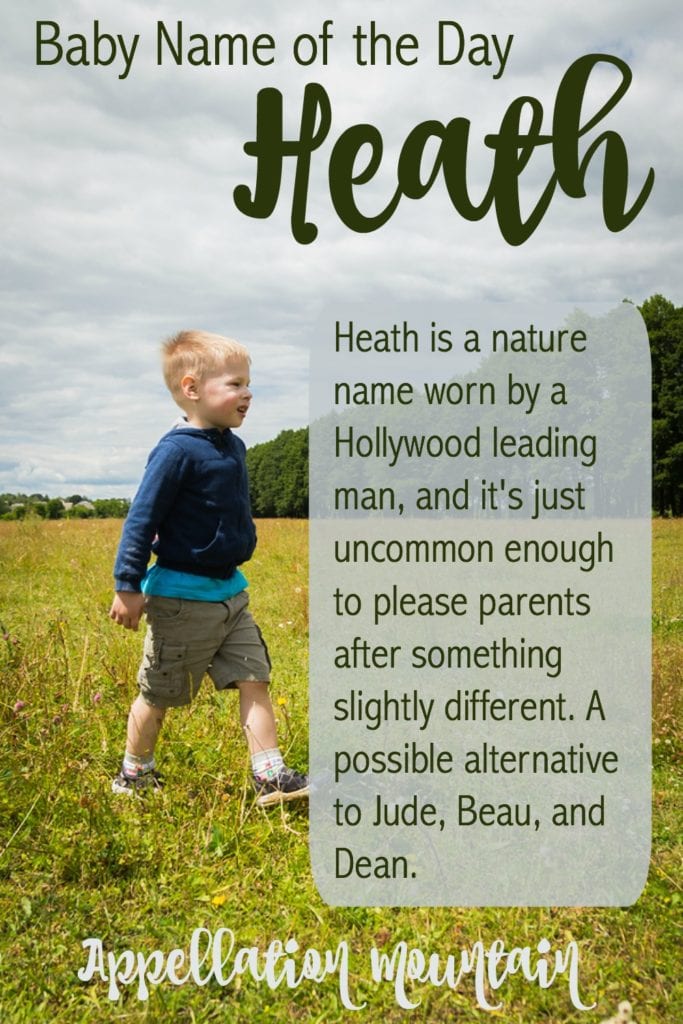 Heath is a nature name and a Hollywood leading man.

Thanks to Bek for suggesting our Baby Name of the Day.

Heath: Baby Name of the Day

This is a nature name, and a word name, too. It evolved from the Old English hæð, which has a meaning closer to wasteland, but a heath is actually quite pretty.

You can find them in England and California, Chile and Australia. Unless you’re a resident of Antarctica, you’ve probably seen one.

It started out as a surname for people who lived such a habitat, and slowly migrated to first name status.

This name might’ve remained firmly in the last spot, save for the television Western Big Valley. While we often think of surf boards and peace signs, the 1960s were also good to Stetsons and cowboy boots, at least on television.

A handful of pre-Valley bearers of the name includes Heath MacQuarrie, the Canadian politician and writer. He named his eldest daughter Heather.

By the 1970s, Heather was a Top Ten name. Despite the shared spelling, it refers to a small, flowering shrub. Still, they may have influenced each other. The girls’ name was rising rapidly when Big Valley debuted.

LS Heath bought a confectionary in Robinson, Illinois. He gave it to his sons, Bayard and Everett, to run. The family businesses also included a dairy.

By 1928, they were offering milk chocolate covered English toffee, and for a time it was marketed as a health food and delivered along with the milk.

It was included in soldiers’ ration kits during World War II, and grew in popularity after the war.

The candy has been made by Hershey since the mid-1990s.

The name peaked in the mid-1970s, and entered a steady decline.

However, it wasn’t enough to return the name to the top of the charts. The name hasn’t cracked the US Top 500 since 1990.

In 2015, the name gained nearly 100 places, to reach #832. It might be the beginning of a real comeback. After all, it’s a nature name like River, a surname name like Hunter, and a cowboy name like Wyatt. It’s also a short name in an age when parents are embracing single-syllable choices. Lastly, Heath could be boosted by our affection for the ‘th’ sound of fellow rising names Theodore and Thaddeus.

For now, it’s a great stands-out, fits-in choice – traditionalish, but with a modern feel, too.

What do you think of Heath? Do you think this name is ready for a comeback?