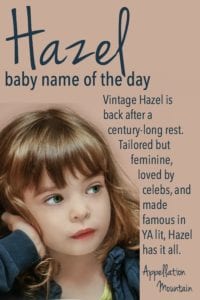 That puts this name in the company of modern favorites like Allison, steadily popular across nearly fifty years without ever quite attaining classic status.

By the 1950s, the name fell out of favor, leaving the Top 1000 entirely during the 1970s. One factor: popular comic strip Hazel chronicled the misadventures of a housekeeper by the name. It ran for fifty years, from the 1940s into the 1990s. In between, it became a successful television series.

During the 1950s, Looney Tunes gave us Witch Hazel, a character who faced off against Bugs Bunny in more than one adventure over the years. While fictional witches can boost a name, this one probably helped cement the image of an out-of-date choice.

In recent years, we’ve forgotten the fictional characters. Instead, we’ve embraced the positive aspects of the name.

One reason? Many vintage favorites feel fresh again after a century of rest – often called the “100 Year Rule.” But that’s far from the only thing driving the name’s return.

In the natural world, it is better known as corylus, a genus of trees and shrubs. Different varieties abound, and many types produce hazelnuts, also called filberts. (Or, in French, avelines – for yet another lovely name.)

Rich symbolism attaches to the plant. Celts believed that eating the nuts made one wise; in Gaelic myth, Finn McCool absorbed the wisdom of a salmon who feasted on hazelnuts. It appears in Norse lore, too, associated with knowledge.

Nature names are wildly popular for girls today, so it’s no surprise to find such a well-known one gaining in use.

Hazel: Beyond the Trees

But this name offers more than just ties to the natural world. Consider:

The word comes from the Old English haesel. It’s been used to refer to eye color since at least the late sixteenth century. How do we know? In Romeo and Juliet, Shakespeare had Mercutio tell Benvolio that he had “hassel eyes.” It’s a play on words, but also proof that the color has history.

In 2004, Julia Roberts welcomed twins. The world raised an eyebrow at their names: Phinneas Walter and Hazel Patricia. Wasn’t her daugther’s name just too, too outdated?

Nope. Instead, Roberts picked up on a trend. The name had returned to the US Top 1000 in 1998, and gained almost 300 places by the time the celebrity baby was born. No question that the high profile birth announcement helps explain why Hazel cracked the Top 500 just two years later.

Then came John Krasinski and Emily Blunt. In 2014 – a decade after Roberts – the couple welcomed their daughter, Hazel. Emily described looking for an “old lady” name that she and John both liked.

Since the Blunt-Krasinski birth announcement, Hazel has soared into the US Top 100. It now ranks #52.

Hazel: Back in a Big Way

There’s also a rabbit connection: the name belongs to a (male) rabbit in 1972 novel Watership Down, and the podcast Rabbits features the name, too.

A heroic teenaged Hazel Miner saved all of her siblings during a 1920 North Dakota snowstorm – even though she perished. Miner remains a local folk hero.

There’s also a Bob Dylan song by the name, and an indie band called Sister Hazel.

The Hunger Games gave us a Hazelle, but it’s The Fault in Our Stars’ Hazel Grace – book and movie – that comes to mind first.

With all of these references, and our love of nature names and all things vintage, no surprise that this name is back in a big way.

Would you consider Hazel for a daughter? Do you think this name will reach the Top Ten?