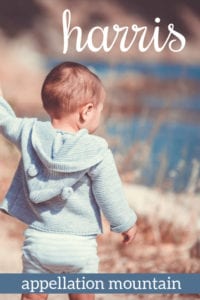 Harris picks up on the Brooks Brothers trend, and offers a fresh take on popular classic Henry, too.

Thanks to Another for suggesting today’s Baby Name of the Day.

Traditional Henry comes from the Germanic elements heim and ric – home ruler. It became Heinrich, then Henri in French. The Normans imported it to England, where it became very English indeed.

There have been eight kings Henry, including the oh-so-famous Henry Tudor, he of the many wives.

We view Harry as an old school Henry nickname. In medieval England, Harry was closer to an everyday pronunciation of Henri. (Listen to Henri pronounced in French, and you can imagine how it happened.)

Harris – and Harrison – simply mean “son of Henry.” It’s a patronymic, just like Anderson and Johnson and so many other surnames.

Plus, since Henry and Harry were wildly popular first names, there are plenty of people with these last name forms, too. (Along with cousins like Hendrix, Henderson, and even Perry.)

It also serves as an Anglicized form of several Irish and Jewish names; plus, the Greek Charalampos – to shine from happiness – can also be replaced by this shorter name. I’m in love with that last meaning, even if it’s probably not the origin for most families’ surnames.

We tend to think of surname names as novel, but of course that’s not true.

Like so many similar choices, it reflects the practice of choosing family surnames – like a mother’s maiden name – for a son’s first or middle name.

While it’s tough to generalize, lots of surname names fell out of favor after the middle of the twentieth century. It wasn’t until the 90s that parents embraced a wide range of last names as firsts – even when they weren’t found on their family trees.

As it happens, the slightly longer Harrison has almost always been more popular than Harris.

But it also opens the door to Harris as a similar, but slightly different pick.

The list of famous figures with the surname is a mile long.

Here’s my favorite quirky name fact: Sirrah sounds almost like Sarah. I like it as a (very) subtle honor name. (Though I suppose it’s a little bit of a stretch.)

Why is it so much less popular than Harrison? I’m guessing Harrison Ford, star of blockbusters from the 1970s right through today, explains much of the longer version’s rise.

But today, with picks like Miles and Brooks and other boy names ending with s gaining in popularity, it could be a great moment for Harris.

Whether it appears on your family tree, serves as a creative spin on Henry, or just feels like a traditonal-but-different choice for a son, I think Harris is a can’t-miss choice.

Do you prefer Harris over other Henry names? Would you use this, or Harrison? 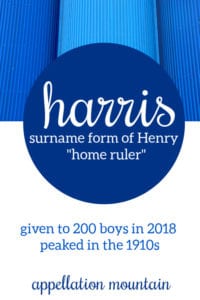