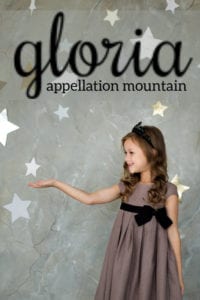 Gloria peaked in the 1940s. Could it be ready for revival right about now?

The -ia ending suggests this name belongs with ancients like Julia and Cecilia.

The Latin phrase “Gloria in Excelsis Deo” translates to “Glory to God in the highest.” It’s been around since at least the 300s, when the Bible was first translated into Latin. According to Luke, the angels sang these words when announcing the birth of Jesus. Even if you’ve only ever these words in A Charlie Brown Christmas, I’m guessing they’re vaguely familiar.

Plenty of famous composers have set it to music, including Handel and Vivaldi. It’s also known as the Greater Doxology, or simply, “the Gloria.”

The Latin word translates simply to glory. As a verb, it means to rejoice; as a noun, it signifies victory, praise, honor, splendor. In English, it dates to the thirteenth century, though the exact meaning and use have shifted slightly over the centuries.

Glory fits with both modern, bold word-inspired names, like Maverick, and more traditional virtue choices, like Mercy or Temperance.

Edmund Spenser used Gloriana to represent Queen Elizabeth in his 1590 epic poem The Faerie Queen. But, like so many of Spenser’s elaborations, it does not appear to have inspired parents in big numbers.

Emily Dorothy Eliza Nevitte Southworth – known professionally as E.D.E.N. Southworth – turned to writing in the 1840s, after her husband abandoned her and their two children. She penned over 60 novels over the next several decades, becoming one of the best-selling authors of her day.

In 1891, she wrote Gloria: A Novel, a followed it with a sequel later that year. There’s a small uptick in the name’s use.

And then came 1897, when George Bernard Shaw’s You Never Can Tell debuted. It’s an early play, well before Pygmalion and other enduring works. But it proved popular, as did the name of the eldest daughter – Gloria.

And then came Hollywood.

Born in 1899, Gloria Swanson landed her first movie roles while still a teenager. She co-starred in a series of successful comedies in the 1910s, then signed to Paramount Pictures in 1919. Swanson became the original Hollywood A-lister. Her movies topped the box office, and fans loved her elaborate wardrobe as much as the films themselves.

She earned two Oscar nominations during the silent film era, but she’s best remembered for her role in 1950’s Sunset Boulevard. Swanson played an aging silent film star. She goes mad, and the movie ends on the legendary line, “Alright, Mr. DeMille, I’m ready for my close-up.” It led to her third Oscar nomination.

A handful of pop culture uses might have boosted the name later in the twentieth century.

All of these 70s and 80s references keep the name stuck in an earlier era. And, like many names popular over several decades, it’s tough to pinpoint exactly when it will feel fresh and new.

Think of it this way: we tend to love names from our great-grandparents’ generations, while feeling lukewarm about our grandparents’ names. Except, at least for now, plenty of us have grandma Glorias.

And yet, numbers alone don’t seal a name’s fate.

Modern Family used the name for a main character in recent years. Actor Maggie Gyllenhaal named her daughter Gloria Ray in 2012. The Lumineers and Green Day have recorded songs by the name. Oh, and that Laura Branigan song from 1982? It’s now wildly popular with St. Louis Blues fans, the anthem of their 2019 Stanley Cup-winning season.

With a great meaning, and a sound that incorporates the Nora/Cora ‘or’ with the -ia ending of Olivia, Amelia, and more rising favorites, Gloria could fit right in.

Do you think this name is ready for revival? 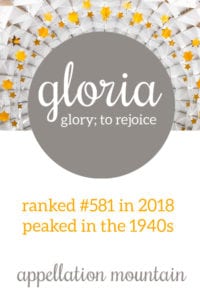