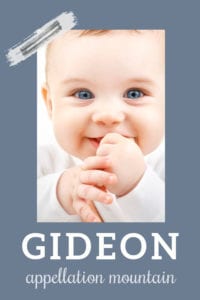 Thanks to Emmy Jo for suggesting our Baby Name of the Day.

When we meet Gideon in the Old Testament, the Israelites have turned away from God. They’re worshiping a statue of Baal instead. Gideon is chosen to destroy the idol, and to protect the people from an invading army. He smashes and bashes without much difficulty, but when it comes to the military maneuvers? God specifically instructs him to go into battle with a shoestring army as a show of faith. Gideon obeys and triumphs by wit as much as weaponry.

The baby name Gideon means “mighty warrior,” or more literally, “feller” as in trees – or you know, armies and false gods.

Because his story is one of commitment, he’s the role model chosen by the Christian evangelical organization, The Gideons International, when they were founded back in 1899. In addition to placing Bibles in hotel rooms around the world, they also distribute them to the military, students, and medical personnel.

It helps that the Puritans embraced the name, leading to a handful of early American notables with the name. Gideon Welles served as Secretary of the Navy during the US Civil War. His successful blockade of the Confederacy is considered a major reason for the Union’s triumph.

Maybe that’s because this is the age of Elijah and Isaiah, expressly Old Testament names that are also style stars.

Or maybe it’s because Gideon brings to mind favorites like Adrian and Julian and even Sebastian, three-syllable, ends-in-n names that feel polished and accessible.

And, of course, it helps that the baby name Gideon has been used for ages, as both a first and a last.

FELL and CAT, BROTHER and MUTANT

From the 1950s into the 1970s, the fictional Chief Inspector George Gideon of Scotland Yard solved crimes in novels by JJ Maric, as well as a British television adaptation.

In 1954, the name belongs to the youngest of brothers in the musical Seven Brides for Seven Brothers. They’re named in alphabetical order: Adam, Benjamin, Caleb, Daniel, Ephraim, Frank, and – what else? – Gideon. (He marries Alice. The brides’ names don’t follow any particular pattern.)

That’s a pretty accurate picture of Gideon for much of the twentieth century. The name feels familiar, but rare. It’s buttoned-up, sometimes vintage, and not exclusively virtuous. It must have been something like Jasper – we all recognized it, but few of us were considering it for our children.

The name caught on slowly.

It was the title of a minor movie in 1999; Andre Braugher starred in a short-lived medical drama called Gideon’s Crossing in 2000.

None of these – or other minor mentions – really explains the name’s comeback.

Since then, characters with a range of personalities have worn the name on Gravity Falls, Once Upon a Time, and, most recently, The Mandalorian.

All of this has helped take the baby name Gideon to #320 as of 2019. It still feels a little bit offbeat and unexpected, the kind of name that surprises. But it’s edged closer and closer to the mainstream over the years. Today it feels old school, but plenty cool.

Would you consider the baby name Gideon for a son?

Originally published on June 11, 2008, this post was revised substantially and re-published on January 5, 2021. 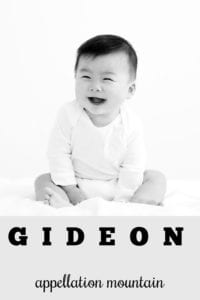