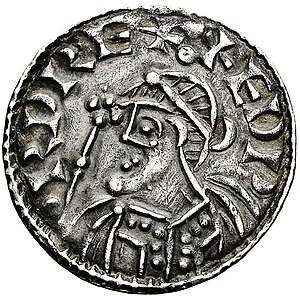 Editor’s note: This post was originally published on November 22, 2013.  It was substantially revised and re-posted on December 30, 2013.

He’s as classic as they come, but in the US, lags behind other regal monikers like William and Henry – despite the heartthrob vampire starring in Stephenie Meyer’s Twilight.

Thanks to Katharine for suggesting our Name of the Day: Edward.

There are a handful of Ed- names, all from ead, an Old English word for rich.  That’s not necessarily rich in yachts and diamonds.  It can also mean fortunate or blessed.  Edward is “rich guard,” Edwin is “rich friend,” and Edmund is “rich protector.”  Fine meanings, all.

King Edward VIII abdicated to marry Wallis Simpson, but there were seven kings Edward of England before him.  Plenty of princes and nobles have also answered to the name, as well as lots of saints.  In the tenth century, one king was murdered and became Saint Edward the Martyr.  In the eleventh century, another ruler became Saint Edward the Confessor.  (That’s him on the coin!)

The current British royal family includes a Prince Edward Antony Richard Louis, Earl of Wessex and eighth in line to the throne, dad to Louise and James.

That’s all very proper, but Edward is also vaguely edgy, even alternative.  Twentieth century uses include:

Jane Eyre’s beloved Rochester is also an Edward. There’s something surprisingly romantic, even brooding, about this solid name.  It was a logical choice for Meyer’s leading man.  And yet, could that be why some parents are avoiding this name?  The vampire clan’s surname, Cullen, has fared well in recent years, making it seem even more surprising that Edward remains in style limbo.

Other household names include:

Overall, Edward is a strong choice for boys.  It’s hard to argue that the name is anything but an evergreen classic.  And yet, even though the hundred-year rule suggests that he should be back in fashion, Edward remains slightly off trend.  That’s not a bad thing, though.  If you’re discouraged that William is so popular, Edward is an equally appealing option.