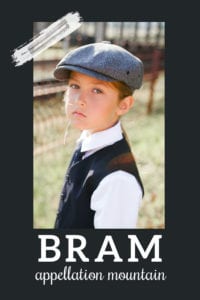 The baby name Bram fits with brisk, brief boy names like Jack and Cole, but also sweeping romantic heroes, like Tristan and Sebastian.

Thanks to Leela for suggesting our Baby Name of the Day.

Bram comes from Abraham, the Biblical patriarch name. In Hebrew, it means “father of many,” which is, of course, Abraham’s story.

When he’s first introduced in the Old Testament, his name is Abram. The addition of the extra syllable comes after God tells him he’ll be the father of nations. Abraham is significant in Judaism and Islam, as well as Christianity.

The name has a long history of use, especially in the east and among Jewish families.

Protestant parents embraced Abraham following the Reformation, and it appears steadily in the US.

Most notably, it’s the given name of the sixteenth president, Abraham Lincoln. Others include entrepreneur Abraham Abraham – not a typo! – who founded the Brooklyn department store Abraham & Straus. The flagship store on Fulton Street still operates as a Macy’s today.

But the baby name Bram isn’t all about Abraham.

It can also come from English surnames like Bramwell and Bramley. In this case, Bram comes from the Old English brom – broom or gorse. It refers to shrubs with long branches and yellow flowers. Tied together, the branches were good for sweeping – hence, a broom. But gorse was also used for many things, including a yellow dye.

Fun fact: the Plantagenets – the royal house that ruled in Europe, including England for three centuries – derived their name from the Latin Plante Genest. Genest or genista referred to broom.

Some sources suggest that Bram means raven. In our age of Leo and Wren, that feels incredibly appealing.

Except it’s Bran – with an N, not an M – that means raven. Figures in both Irish and Welsh legend answer to the name.

So there’s no meaningful connection between the bird and the name.

Still, it’s easy to see why we mix up ravens and the baby name Bram.

Born Abraham in Dublin in 1847, the author spent many years researching folklore before writing his masterpiece.

The novel debuted in 1897. While it was popular, it wasn’t considered a masterpiece.

1922’s Nosferatu, the first vampire movie, revived interest in Dracula. The German movie was a sensation. So was the law suit filed by Stoker’s widow. Together, it created renewed interest in the novel.

Movie adaptations continued, with Bela Lugosi creating the most famous Hollywood version of the Count in 1931.

In Belgium and the Netherlands, it’s a different story. The Dutch especially embraced Bram, where it ranked in the Top Ten until recently. It fits right in with so many short boy names in favor there: Sem, Daan, Luuk, and Mees, to name just a few.

The baby name Bram appeals because it’s two things at once.

Thanks to Stoker, Bram feels romantic and storied. It’s a surprising name from an earlier era.

But sound-wise, Bram fits right in with short, high-energy boy names like Max and Finn.

For parents after something different but with roots, and brief but with plenty of style, the baby name Bram offers an intriguing possibility.

What do you think of the baby name Bram? Do you like it better as a nickname or a stand-alone? 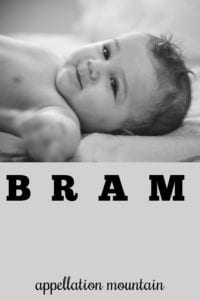