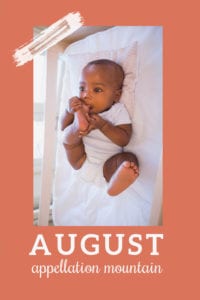 The baby name August sounds like high summer, but with a grand meaning and history galore, it’s a surprising serious, grounded choice for a son.

It’s the very height of summer, the season of cookouts and barefoot walks on the beach.

But the baby name August traces its roots all the way back to the first emperor of mighty Rome, circa 27 BC.

He answered to Octavian. Born the great-nephew of Julius Caesar, his title wasn’t actually emperor. Instead, the Roman Senate proclaimed him Augustus.

It comes from either the Latin augere – to increase, or possibly augur – to see the future.

The meaning is usually given as venerable or grand.

Accomplishment, too. Augustus would reign for four decades, doubling the size of the empire, both by conquest and alliance. By the end of his life, Rome ruled territory from Britain to India. In history books, we refer to him as Emperor Augustus, implying it served as a first name.

Augustus might’ve been the first, but others followed.

The fourth century theologian, Augustine of Hippo, penned Confessions, The City of God, and more works still influential today. He’s not the only saint by the name.

The baby name August has appeared in the US Top 1000 every year from 1880 onward.

During the nineteenth century, it regularly appeared in the Top 100. But it slowly faded, hovering near the very edge of the rankings by the 1970s. As of 1983, it reached an all-time low of #930. That represents 90 births – about a quarter of the number of Augusts born fifty years earlier.

The baby name August remained rare into the 1990s, when a slow and steady recovery began.

August Wilson won a Pulitzer Prize for The Piano Lesson in 1990. Anthony Hopkins starred in a movie titled August in 1996.

But most of the name’s uses lean younger, even storybook.

A long list of celebrities welcomed sons named August during the same era, including Dave Matthews and Mariska Hargitay.

It could be headed back to the US Top 100. It’s a summery, seasonal world name, as borrowed from the natural world as River or Kai. But it’s also a name with a long and international history, accomplished and distinguished. Nicknames Auggie and Gus are darling, but in full, August is sophisticated and strong.

It’s easy to imagine the baby name August continuing to gain in use, a name with history to spare that’s right at home in the twenty-first century.

What do you think of the baby name August? 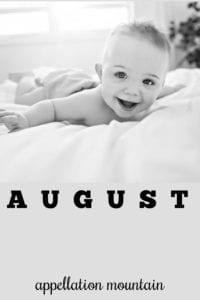