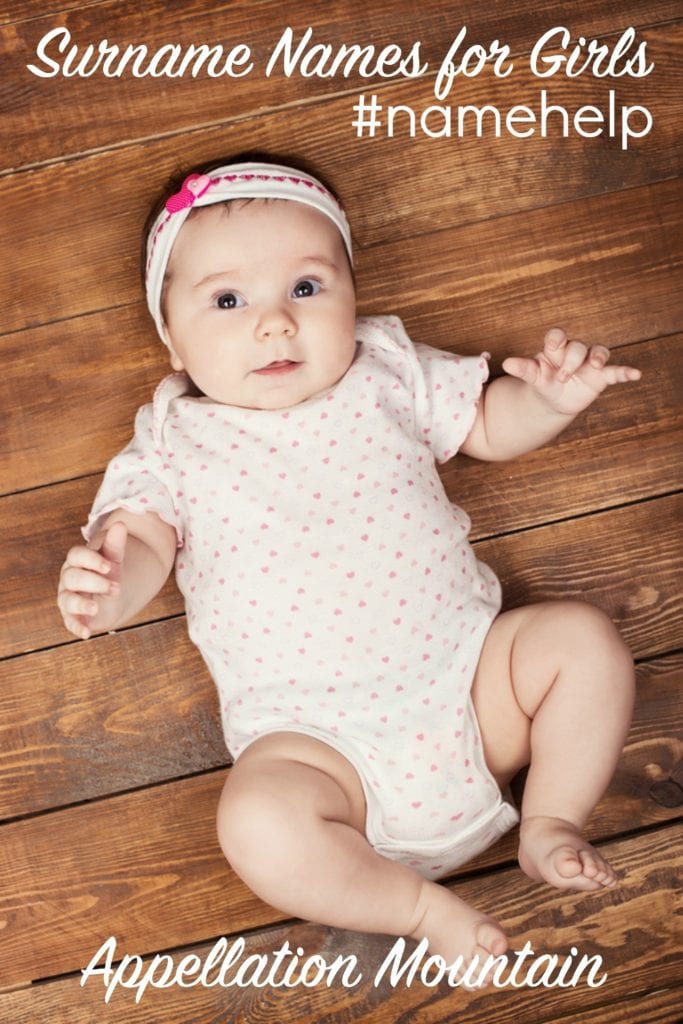 My husband and I have spent years disagreeing and arguing about baby names! I am super picky and like unique names that are uncommon (and maybe most importantly a name I do not know anyone personally with that name) because I have a horrible name association disorder.

My husband likes unique too, but thinks I’m crazy with some of my suggestions and my association dilemma!

We are expecting our 5th baby this summer – it’s a girl! – and need help deciding on a unique yet flowing name to join our squad. I do tend to find unisex surname type names very appealing.

Any help or group suggestions would be appreciated!

I think the challenge is this: lots of people like this sort of surname-style name. Often these names feels unusual to us at first – but when we look at the numbers, there really are quite a few kids out there called Everly and Hudson and Sloane.

The other challenge is that, after four children, some names are ruled out because they’re too close to your older children’s names. It might be better to avoid ends-in-n names, since you have three already.

Happily, there are still plenty of possibilities.

Adair – Years ago, there was a quirky little Showtime series called Dead Like Me, with a character named Daisy Adair. The surname is Scottish. Some say that Adair is based on Edgar. But it’s light and very wearable for a girl, I think. Adair was given to 20 girls and 56 boys last year, making it slightly more common than Breslin, but not by much.

Embry – Embry picks up where Ashley and Avery and Aubrey left off. 51 girls and 15 boys were given the name last year. It feels current, but still very uncommon – exactly what you’re after, right?

Halston – Yes, I know. I suggested skipping ends-in-n names. But Halston is begging to be used! Halston was the fashion house that defined the 1970s. Today, it’s the kind of name that’s familiar and intriguing, but far enough in the past that it’s not quite like naming your baby Armani. Bonus? It was given to 14 boys and 6 girls last year, making it rare, indeed.

Maguire – Do you mind the idea of repeating a first initial? Maguire sounds very different from Madden, except for the M. 8 boys and fewer than 5 girls received the name last year. Of course, it’s relatively common as a surname, too.

Marlowe – Another M name – the marvelous Marlowe! Spelled Marlo, it’s an old school mash-up of names like Mary Louise or an unconventional Margaret short form. But Marlowe makes it a surname. It’s rising, and was given to 220 girls and 17 boys last year. That means it’s not completely unfamiliar, but is far from Harper/Madison territory.

Palmer – I think Parker works well as a girls’ name, but it’s pretty familiar. Piper keeps catching on. Palmer seems like a slightly different spin on the two. It originally referred to pilgrims, traveling to the holy lands in the Middle Ages and returning with palms. That said, it was given to around 300 children last year – more girls than boys – so it’s definitely slightly more common.

Sinclair – Sinclair started out as a contracted form of St. Claire. It’s a common place name; say it five times fast and you might find yourself saying Sinclair instead. It doesn’t sound like your older children’s names; the Clair makes it more clearly feminine; and it’s quite unusual. Just 17 girls and 10 boys were given the name last year.

Thayer – One of my favorites, for a girl or a boy. Thayer comes from the same roots as Taylor. Now that we’re naming kiddos Theo and Thea and such, Th surname names seem like they could be stylish, too. I like Thatcher, but Thayer makes this list. Given to 51 boys last year, and fewer than 5 girls.

Winslow – If Marlowe feels too familiar, maybe Winslow would appeal? There’s a town called Winslow, Arizona, immortalized in the Eagles/Jackson Browne song “Take it Easy.” 24 girls and 21 boys were given the name last year.

I like all of these quite a bit for your family, though Adair and Embry are probably my favorites.

Readers, what would you suggest to Amanda for her new daughter?