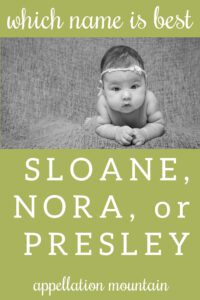 My first and only child will be here around Valentine’s Day. I’ve done all the things: researched names, made lists, ranked my favorites, practiced saying them aloud, tried writing them out. The good news? I have three names that I really like.

The bad news, of course, is that I have three names I really like. And even if I could theoretically use one of the runner-up names as a middle name, it doesn’t change the fact that I still have to pick a favorite.

I’m a single parent by choice, and so there’s no one else who could offer a tie-breaking vote. I’ve asked the three people closest to me and, surprise, they each chose a different name.

The three names are:

NORA – I like that it’s traditional, and that I can picture it on a child or a grown woman.

SLOANE – Love how cool this name is! It’s the kind of name I’d want to choose for myself if I could. But maybe it will sound a little silly/dated/something in another twenty years?

PRESLEY – I’m not an Elvis fan, and when I first head it, I didn’t like it all. But I keep coming back to it, and I really like the way it sounds with my last name. Also, this is my mom’s favorite, so maybe that’s making me liking it more, too. (I thought for sure she’d vote for Nora!)

My last name is three syllables, starting with R and ending with -son.

You can use Nora with Presley or Sloane as a middle, but Sloane Presley sounds like it should have “Memorial Hospital” after it. Yes, plenty of parents name their kids Preston Sullivan and Riley Carson, and it’s fine. But all things being equal, I think it’s better to have one name be more obviously a given name. That’s even more true because your surname is fairly name-like. I think this is the strongest argument in favor of Nora – you get to choose two of your favorites, even if one is seldom used.

Presley and Sloane have very similar popularity profiles, but Sloane seems maybe a little more substantial. This might be just my impression. Sloane took ages to really catch on. Sloane Square became a prominent London neighborhood in the 1980s. (The future Princess Diana was a “Sloane Ranger” – a sort of British version of preppy.) Ferris Bueller gave us a Sloane, then so did Entourage, but she spelled it without the E. Sloane/Sloan and Presley have gained steadily throughout the 2000s, but I still think of Sloane as slightly more established.

There’s a potential for misspelling with any -ley name. Or maybe I’m just a little hesitant about the possibility of having to spell Presley. Even though the -ley spelling is, far and away, the most popular, way ahead of Preslee or Preslie or Presleigh.

If it isn’t obvious, I’m inclined to rank them in that order: Nora, Sloane, Presley.

But for a first-middle combination, my favorite is Nora Presley.

It’s a little unexpected, a mix of the traditional and the modern. You’re not an Elvis fan, and I’m guessing fewer people will break out their version of “Hound Dog” if it’s your daughter’s middle name.

You might even choose Nora Presley Sloane or Nora Sloane Presley. I kind of love them both, but that depends on how you feel about double middles. (Especially if you’re a one-and-done mama, I say there’s no reason to hold back on an extra middle. But it’s very much a personal preference.)

That said, Nora is probably the safest of the options, even with a current middle name – or two.

So I’ll also offer this: would you like the sound of Presley Eleanor? It’s not quite Nora, but it’s a great combination of a buttoned-up classic with a stylish favorite of our moment.

I like it nearly as much as Nora Presley – maybe even a little bit more.

Readers, what do you think? Would you choose Nora, Sloane, Presley … or some combination of them? Any middle name suggestions?